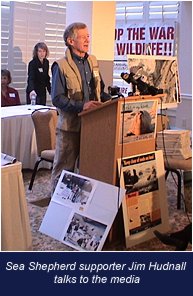 Paul, Sea Shepherd has been instrumental in curtailing for the moment the City of San Diego's ugly activity with respect to the La Jolla harbor seal rookery. We now need to get to the Marine Mammal Commission in a big way to let them know that NOAA/NMFS's abandonment of the La Jolla seals is a crooked deal which would set a horrible precedent.

"Thank-you to all Sea Shepherd supporters who responded to Jim Hudnall last week when the City of San Diego announced they were going to take immediate action to remove the seals from the beach at La Jolla.

"This is just a temporary reprieve and we must keep the pressure on the proper authorities to obey Federal law and protect the seals at La Jolla."

Subject: Recommended Immediate Action for the La Jolla Seals Disregarding the O'Sullivan lawsuit order for the moment, there are now two separate projects which the City of San Diego Park & Recreation Department's people may pursue. Of most immediate concern to us is their project to permanently rid Children's Pool Beach (CPB) of seals by causing the seals to abandon their rookery. This project could begin at any time, since National Marine Fisheries (NOAA/NMFS) has abandoned Marine-Mammal-Protection-Act protection of these seals, and has advised the City that no permit of any kind is needed.

The obvious way to cause abandonment of the rookery is to drive the seals off repeatedly over a lengthy period of time. (City Attorney Mike Aguirre said on Friday, October 21 that this won't happen any time soon, except over his protest, whatever that means. Hopefully, it means he would cause any such chasing-away action by Park & Rec to stop immediately.)

The second, and now separate project, is "dredging" 3,000 cubic yards of sand away from CPB to remove the seals' habitat and reduce the beach to the approximate 1941 size. This project requires a number of permits as detailed in City of San Diego's Memorandum (the Memorandum) dated October 19, 2005 to Deputy City Attorney Robert Martinez from Ted Medina, Park and Recreation Department Director; subject: Children's Pool Status Update, Reference: San Diego Superior Court Case No. GIC 826918). The permit application periods are lengthy and public hearings are included.

A knowledgeable dredging-project manager might ensure that the seals abandon the rookery long before the dredging project starts to prevent those wild-eyed seal huggers from getting in the way. A Park & Recreation manager concerned about "pollution" from seals might run the seals off permanently and skip the dredging project entirely.(See Memorandum Exhibit 5, Page 4, Para 7c.)

If the City begins to seriously chase the seals away (even more chasing away than the City lifeguards and swimmers currently do), and Mike Aguirre doesn't stop this action immediately, the California Coastal Commission (CCC) may intervene on behalf of the seals. CCC staff is currently having internal discussions about whether the Coastal Act's Chapter 3, Section 30230 or other applicable section might be used to do this.

Also, any effort by the City to cause the seals' abandonment of the rookery without a permit might provoke the Humane Society of the United States (HSUS) to file a lawsuit against NOAA/NMFS (See HSUS Attorney Patricia Lane's October 20, 2005 letter to Rodney McGinnis, Regional Administrator, NOAA Fisheries.)

In order to ensure maximum protection against rookery abandonment for the La Jolla seals in the current circumstances, pressure needs to be applied to San Diego City Council members (who might be persuaded to pass a resolution preventing seal chasing), and persuasion needs to be utilized with the CCC to intervene if necessary. Finally, because the NOAA/NMFS abandonment of seal protection was a patently-illegal, back-room, closed-door deal with the City, NOAA/NMFS needs to be exposed by filing complaints with the Marine Mammal Commission, the policy-setting regulatory body for marine mammals in the United States, and by issuing news releases to the national media. In every instance of pro-seal action you do regarding the NOAA/NMFS back-room deal, the November 17th, 2005 NOAA/NMFS letter from Rodney McInnis, Regional Administrator, to April Penera, City Manager's Office (City of San Diego) needs to be cited.

On October 27th we will learn more about the City's plans as related to the Valerie O'Sullivan lawsuit order, since the City has to report to Judge Pate on that date. The Memorandum details much of what has been done so far by the City, and you might wish to obtain it, as well as other documents referred to above. 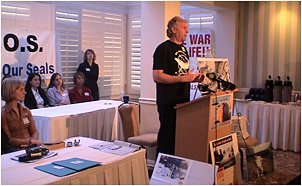 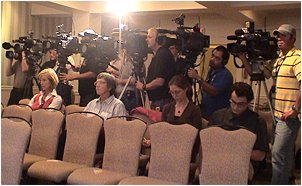