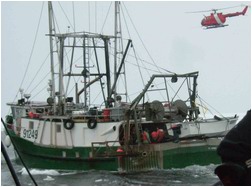 The seals got a little satisfaction this week-end with the burning, sinking and total destruction of the Newfoundland registered 65-foot sealing boat L.J. Kennedy at dockside in Port au Choix, Newfoundland.

The firefighters were unable to enter the vessel because the boat had taken on a full load of fuel and ammunition for the seal slaughter.

"It is obvious that the vessel was a target of opportunity," said Captain Paul Watson. "Boats just don't catch fire in the middle of the night by accident."

The owner of the vessel Ben Gould had brought the ship into port to "take another shot at the seals," he said.

"While it looks as if someone has taken a shot at him instead," commented Captain Watson.

"I am happy to hear that no one was injured. That would have been a tragedy," said Captain Watson, "but this event is nothing if not good news for the seals. Many lives will be spared because of this sinking and one less sealing boat on the seas is an even better thing. Who ever did this is a hero as far as I'm concerned."

Sea Shepherd Conservation Society was not involved directly or indirectly with this incident. Captain Watson is banned from entering Newfoundland or the areas near the seal slaughter.