Canadian sealer Desmond Adams was quoted on Saturday, April 21, in the Newfoundland media as saying, "We all go out for the love of it rather than the money, which isn't there anymore." 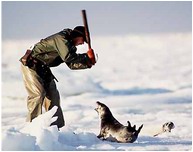 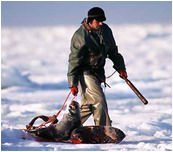 This means that the Canadian taxpayer is now currently paying the bill in millions of dollars to provide four full time icebreakers to assist a bunch of thugs who sadistically bash in the heads of seal pups for pleasure.

Some 400 sealers on about 100 small boats remain trapped in heavy ice off the Eastern coast of Newfoundland in one of the heaviest ice jams in memory.

Unable to break the boats free, the Canadian Coast Guard has turned into "errand boys for the sealers" flying in groceries to the stranded boats.

The sealers are complaining of boredom according to the Newfoundland newspaper the Western Star.

"The poor men," said Sea Shepherd ship's cook Laura Dakin sarcastically, "having to sit out there without being able to kill any baby seals." She continued,  "Actually, their boredom makes me very happy knowing that seal pups are not being slaughtered."

Over 60,000 seal pups are available under the quota of 275,000. Over 200,000 have already been clubbed or slaughtered. This does not take into account the estimated 250,000 pups killed by diminished ice conditions in the Gulf of St. Lawrence last month.

Adams, who kills seals for fun, was also sharply critical of his fellow sealers who have been laughing off the danger they are in. "Very few will admit it, but what's happening is extremely dangerous," he said. "They act like clowns about it; they just shrug it off. And I think they'll get away with it this time. But if there were sustained very strong winds, which can happen with very little warning here, then you'd have a major catastrophe. They'd all go down, including the icebreakers, with all hands lost."

"None of these boats, big or small, is registered for ice and some insurance companies won't cover you for the seal hunt," continued Adams. "Others, the ice-damage deductible is so high, no one ever reports damage. We just fix it ourselves. But these little boats are eggshells; they're that fragile. You could crush them like that."

The Canadian government has acted very irresponsibly in allowing vessels that are not ice-strengthened to venture into these conditions.

"There is a double standard," said Captain Paul Watson. "My ship the Farley Mowat is an ice-class ship and I have more experience in navigating in ice conditions than most of these sealers, but the Coast Guard did everything they could to prevent us from going into the ice to save seals citing their concerns for our ‘safety'."

Adams also said that the hunt continues not for the money but because the government wants it to continue.

"No one's going to stop hunting if they don't have to. We need someone to tell us, `No, this is too dangerous. You can't do it.' Newfoundlanders are good at following orders.
They've told us we can't fish and we can't do this or that. And we don't."

No one's getting rich from the seal hunt, he said, "at least not among the hunters. The price of pelts is down to about $55, about half what it used to be."

Not only that, the ice crisis means the sealers will be delayed in getting back to their main livelihood - crab fishing and shrimping. Adams commented, "The later you take a crab, the worse the quality. We're getting hurt."

These comments from a veteran sealer certainly contradict the position of the Canadian Department of Fisheries and Oceans that the seal hunt is an economic necessity.

Click here to read the full story by the Toronto Star.