The verdict in not surprising, however, from a country that has a government pathologically fixated on supporting the seal slaughter industry at all costs. We have already had the disturbing coverage of Governor General Michelle Jean eating a raw seal heart on national television and Prime Minister Stephen Harper chowing down on a seal meat lunch to prove he’s in solidarity with the baby killers of Newfoundland and the Maganderthal Islands of Quebec.

The Judge was hysterically over dramatic in her judgment, stating that, “Their behavior was so egregious it caused seasoned veterans of the sea to fear for their lives.”

It is an amusing image. Picture big, tough, grizzled Nufie sealers cowering in abject fear before a boatload of vegetarians. 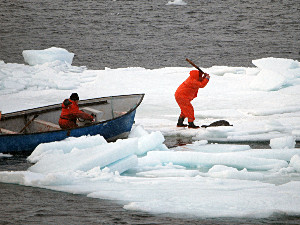 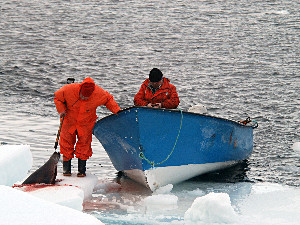 That statement alone is worth the fine imposed on our courageous officers for their efforts to expose the atrocities committed on the ice floes against the baby seals.

The court also cited the contempt shown to the Fisheries Officers when Peter Hammarstedt replied to a demand to show a permit to approach the seal hunt and said over the radio, “Permit? I don’t need no stinking permit.”

Apparently the court was unaware of that famous line by Alfonso Bedoa in The Treasure of the Sierra Madre. The Judge was not amused.

The Canadian Court Conspiracy to Cater to Cowards

“There is no doubt that this sentence was politically motivated,” said Captain Paul Watson. “The Department of Fisheries and Oceans wanted their heads and the orders were clear – deny the defendants an opportunity to appear in their own defense and then throw the book at them.”

Both men were arrested outside the Canadian twelve-mile limit when a paramilitary RCMP SWAT unit forcefully boarded the Farley Mowat in April 2008 to seize all documentation that the Sea Shepherd crew had recorded of the cruelty against the seals inflicted by sealers. The Sea Shepherd Conservation Society was gathering documentation to present as evidence to support the then proposed European Parliament ban on seal products.

Not all of the documentation was seized. Captain Paul Watson was able to remove some of evidence from the ship when the Farley Mowat docked in the French Islands of St. Pierre and Miquelon just south of Newfoundland. Despite a violent assault on the Farley Mowat by French fishermen, Captain Watson along with Chief Cook Laura Dakin eluded the mob and departed by airplane before word reached the fishermen to intercept them at the airport. Other digital cards were smuggled off the ship hidden in the person of the other eighteen crew detained but not arrested.

The fines will not be paid because both Sea Shepherd officers hold the opinion that they were denied their right to a trial.

"I remain proud of our actions in documenting the brutal Canadian baby harp seal slaughter. Ultimately, we won the battle in the court of international public opinion, so no sentence, no matter how Draconian, will convince me that my part in filming the brutal slaughter of harp seal pups was wrong. I know who the real criminals are - the barbarians who we filmed skinning seals alive contrary to the Marine Mammal Regulations. If Judge Whalen had any sense of justice at all, the seal killers who we documented engaged in their cruel practice would have been the ones to be fined and imprisoned, not the people taking the pictures,” said Peter Hammarstedt, the 1st Officer of the Farley Mowat.

Captain Alex Cornelissen responding from the Galapagos Islands said, “The Canadian government continues to take extreme measures to prevent people from exposing their most horrific secret, the largest marine wildlife slaughter on the planet. Boarding our Dutch registered vessel in international waters at gunpoint couldn’t prevent us from getting evidence to the European parliament that this so-called hunt is nothing short of a biological holocaust and the sealers, nothing but sadistic butchers. The amount of the fine is totally irrelevant as even a one million dollar fine would not impress us as we did nothing wrong, we are not the ones committing crimes against nature. And since we are inadmissible into Canada mentioning a jail sentence in lieu of a fine is nothing but a final sputter from the bureaucrats who can’t admit defeat. Paying the fine is the last thing on my mind. The hunt is virtually over; there is no longer a market. We may have lost the battle in court but we won the war to ban seal products.”

“It was a kangaroo court and the Judge delivered the verdict demanded of her by the politicians,” said Captain Paul Watson. “She convicted two men under this Orwellian regulation that denies the witnessing of an atrocity against the seals and she did so although they were denied entry into the country to defend themselves and then she delivers the ridiculous fine of $45,000. If this is what Canada considers justice than all Canadians should be ashamed of themselves.”

Up until the sentencing, Captain Paul Watson has had to remain quiet about his strategy in sending the Farley Mowat into the Gulf of St. Lawrence in the spring of 2008.

“The Farley Mowat had reached a stage where we had to retire the ship. The annual dry-docking charges to keep the ship running was becoming a burden and the ship was much too slow for continued use in the Southern Oceans. It is expensive to retire a ship however, especially an old ship so we had to find a way to retire the Farley without added expense. So I decided to send the ship on her final voyage straight into the arms of the Canadian Department of Fisheries and Oceans with the mission of documenting the 2008 Canadian slaughter of seal pups. As a Canadian I stood down as Captain and promoted First Officer Alex Cornelissen of the Netherlands to be master of the Dutch registered Farley Mowat. We needed to send a European crew on a European ship to focus attention on the seal slaughter to bolster support for the then proposed European legislation to ban seal products into Europe,” Captain Watson said.

“I spent a week goading and daring Fisheries Minister Loyola Hearn into seizing the ship with announcements stating that ‘he did not have the guts’ to take our ship in international waters. It was the classic Br’er Rabbit strategy of please don’t throw me in the briar patch when all the time Br’er Rabbit wanted to actually be thrown into the briar patch,” he continued.

“So, we sent the ship in as the Tar Baby Farley and Loyola did what we expected him to do. He raided the ship and he got stuck with it. First they asked for $50,000 to bail the ship out although there were never any charges against the ship or owners. I refused to post bail and they held the ship accruing costs each day until a Court ruled without a trial or a hearing to place the ship up for auction. After spending a million dollars on security and berthage costs, the ship was sold for $50,000 but the new owner did not come up with the money and the government still has the Farley building up daily expenses for the Fisheries Department.

“The case is now closed, the Canadian government is still stuck with the Tar Baby Farley. Alex and Peter have no intention of going to Canada, in fact they are forbidden to go to Canada, so the fines will not be paid and they cannot be extradited on a misdemeanor or non-indictable offense. Valuable evidence was secured to back up the European legislation to ban seal products and the campaign received a great deal of media attention in Europe worth far more to Sea Shepherd than a ship that needed to be retired.

“So it is safe to say that Operation Tar Baby Farley was a success. Case closed,” Captain Watson concluded.