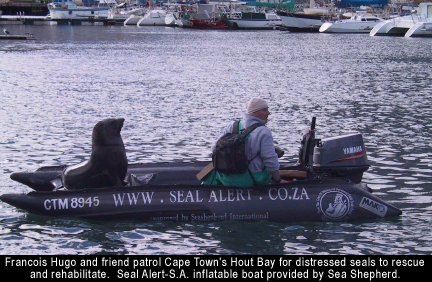 In a throwback to the apartheid era when the public was excluded from all participation in wildlife management, Cape Town's own "Seal Whisperer," François Hugo, is being prosecuted by the South African Government for showing kindness to seals.

François patrols the bay for distressed seals in the harbors in a inflatable boat provided by the Sea Shepherd Conservation Society. He identifies the seals' problems (starvation, entanglement, injury, illness, etc) and rehabilitates the them in the wild, which is proven to be the most effective recovery strategy. The Cape Town community strongly backs his efforts.

With starvation being most significant problem facing the once abundant fur seals, François purchases fish using his own funds and feeds the distressed seals from the boat or a platform in the harbor. However, South Africa's Marine and Coastal Management (MCM) recently passed a regulation making the feeding of seals an offence, unless a permit is issued by the MCM.

Despite numerous requests and public hearings, François has been denied a permit for his seal rescue operation, and has now been charged with breaking this new law, dubbed the "François Hugo regulation" as it seems aimed directly at him. If caught again helping the seals by feeding them, François could face 1 to 2 years in prison. François is taking the issue to the higher courts of S.A. and is currently raising funds for the expensive legal campaign.

The South African seal population has been adversely affected by humans since European settlers arrived over 400 years ago. Once too numerous to count, today 11 out of 20 seal islands in S.A. are extinct of seals, including Robben Island, a world heritage site which was originally named by Dutch settlers after the cape fur seals ("robbe" being the Dutch word for seals). Populations on 6 out the 9 remaining seal islands are have declined by 62% collectively despite 30-years government protection. The Namibian half of the population has dropped by 45% since 1997 and the culling quotas are increasing. The SA fishing industry is currently drowning, clubbing, shooting and starving more seals than are being born.

In addition to man-made threats from pollution, fishing net/line entanglement, loss of habitat, and food depletion, the seals have been continuously hunted illegally for their fur and body parts (seal penises are sold as aphrodisiacs to Asian markets). Contributing to the problems, the MCM is currently offering SA fisherman bounty for recovering scientific tags that were attached to seals for the last 30 years. The tagged seals are to be delivered to the MCM dead. At R200 (US$26) per tag, the fisherman are enticed to kill wild seals in any way possible. With estimated 80,000 tags to be recovered, the MCM is prepared to pay R16 Million (US $2.1 Million) in public funds to recover dead tagged seals, but no money to rescue or rehabilitate sick or injured seals.

Despite South Africa's own Seal Protection act of 1973, the concept of seal rescue and rehabilitation did not exist in South Africa until recently, especially due to the self-funded efforts of François Hugo over the last 5 years. In contrast, daily seal strandings were routinely removed by the SA government and destroyed. If not rescued and rehabilitated by François in the wild, distressed seals who beach themselves may be caught by the MCM and immediately destroyed - the others improperly caged, incorrectly medicated, and then released back into the wild, where they usually die a slow and painful death.

Explains François: "Seals only beach themselves after a long downward spiral, usually caused by lack of food due to illness or injury. Seal Alert SA locates distressed seals in the harbor before they beach themselves and rehabilitates them in the wild by supplying much needed nourishment. Once seals regain their strength, they naturally return to the sea. Without Seal Alert SA fighting for them everyday, their future looks uncertain indeed."

Captain Paul Watson, founder and president of the Sea Shepherd Conservation Society, states: "Sea Shepherd is the first proud sponsor of Seal Alert SA and is in full support of François Hugo and his fight to save South Africa's seals. Sea Shepherd demands that the SA Government rescind its new regulation against helping distressed seals, and/or provide a permit to François so that he can continue his beneficial seal rescue and rehabilitation programs without interference, harassment, or threat of imprisonment."

To help François continue with his work, please write to the following:

If you'd like to donate to Seal Alert S.A. and help François with legal fees to fight the battle in the S.A. courts, please send donations to: