Seal "Hunt" Report from Melissa Tkachyk of WSPA Canada from the Gulf of St. Lawrence 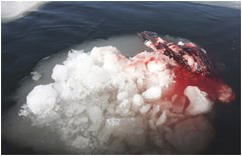 First day of the hunt

Canada's commercial seal hunt began in the Gulf of St. Lawrence at daybreak today but not without several witnesses. When the owner of the Osprey Wharf in North Sydney tried to stop my interview with CBC National News this morning, it was a clear indication that our campaign is influential. The Canadian government has its own stories to tell about this hunt but the video footage and photographs hunt observers bring back every year tell a different one. The video footage needs no introduction, the photos need no captions - this hunt is unnecessary, wasteful and unacceptably cruel.

I accompanied the Humane Society of the United States who documented this cruel slaughter by boat, zodiacs and helicopters. At first all that could be seen were scattered blocks of ice. No seals could be seen for miles.

Then amidst the roiling sea, approximately, 20 sealing boats were spotted close to St. Paul's Island in the Cabot Strait. Sighted easily were the boats that left a trail of blood behind them as they dragged butchered seal pups away from their mothers. Increasingly more of the ice blocks that drifted underneath the helicopter were stained with blood, some with skinned carcasses, evidence that the slaughter was well underway.

Although sealers in this region of the hunt prefer to use clubs and hakapiks as they are cheaper and cause less pelt damage, rifles are this year's killing implement of choice. We watched as sealers tried to kill moving seals on small drifting ice blocks.

Unlike last year, when hunters killed thousands of seal pups on large ice pans in just a few days, this year hunters will have to spend more time searching for the few seal pups that survived the wrath of climate change.

Scientists such as Duke University's Ari Friedlaender say ice cover is declining in critical areas that seals depend on to give birth. Friedlaender suspects this year's pup mortality will be high. After covering a vast area of the Gulf and seeing so few seals, it is becoming increasingly likely many of the pups have already drowned.

The pups that managed to survive the melting ice conditions are currently under siege by hunters. Lying on a small ice block, the pups have nowhere to escape but in the water which isn't the best refuge for the many that have yet to learn how to swim. The accumulative effect of a large commercial hunt and declining ice could be detrimental to Canada's seal herds. But instead of stopping the hunt until research on the implications of climate change is conducted, Harper's government has decided to increase the allowable kill rationalizing that they will deal with the mystery of disappearing ice next year.

Please join us to do something about it. Call your Member of Parliament today and demand their support for an immediate and permanent end to this cruel, unnecessary and wasteful hunt. - end-

Canadian Embassies and Consulates must report to the seat of parliament in Ottawa, Canada, each month - let them send a report that the citizens of their host country are asking the Canadian government to STOP THE SLAUGHTER OF HARP AND HOOD SEALS!

Let him know he needs to do his job to protect our oceans!