Francois Hugo, who has been the leading champion of Southern African Fur seals for years, has sent the following letter and report to John Sellar of the Anti-smuggling, Fraud and Organized Crime section of CITES.

What follows is the report put together by Francois Hugo. It is worth reading to get a complete insight into the issue of Seal killing in Namibia and Southern Africa.

SEAL ALERT-SA ASKS THAT THIS EMAIL BE READ CAREFULLY AND THE CONTENTS NOTED. UPON COMPLETION - PLEASE SEND AN ACKNOWLEDGEMENT THEREOF.

Thank you for your telephonic conversation yesterday. A number of issues were discussed and I therefore would like to further address some of these.

I ask CITES to consider the implications of the following very seriously;

Please could CITES therefore convey these real concerns to the Namibian officials - and request their immediate voluntary announcement to end sealing. Should Namibia accept this offer - Seal Alert-SA will do everything in its power to communicate this to its 12 million supporters and promote the Namibian tourism economy. South Africa has a thriving seal-viewing eco-tourism industry which has existed for over 25-years - one island colony alone, has become one of the top ten attractions in the western Cape, where over 400 000 tourists are ferried annually earning over R20 million in direct ticket sales or USD 3.5 million.

Seal Alert-SA would just need to ensure that less than 200 tourists visit Namibia who otherwise would not have, due to its sealing policy in order for Namibia and its citizens to be fully compensated.

It is important to understand the information provided by Seal Alert-SA does not relate to a single alleged incident - but instead a whole range of conservation, trade and harvest issues that in fact go back decades of mismanagement - which in our opinion, is a threat to the future survival of this species. The whole reason for CITES existence and hence why it has been reported to you. In addition, Seal Alert-SA intends to use every means at its disposal, including undercover work to continue to investigate this industry until sealing has stopped.

Let us deal primarily with CITES involvement with International Trade; Conservation of Specie - killing of nursing pups; Findings of the 'Review of Significant Trade'; Sustainable harvests and the Current Harvest - ignore all welfare aspects. 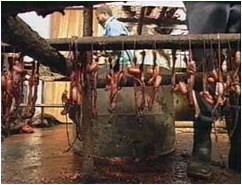 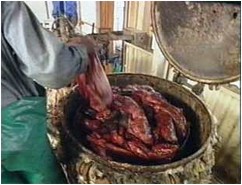 Video evidence of Namibian Sealers in 1993

Correct me if I am wrong. It was acknowledged today by CITES that as per the above chart - no export permits was granted by CITES for any of the above seal products other than those detailed above for the period 1992 - 2002. It was further acknowledged that Cites Secretariat has taken the Cites Animals Committee to task on this. (It should therefore be noted that this in no way removes the fact that Namibia has been in violation of the Cites Convention). Namibian Ministry of Fisheries has stated "sealing regulations require the use of the whole carcass".

Sealing quota for 2006 - is as follows. Namibia Venison & Marine Exporters 38 050 seals. Sealion Products 32 950 and Cape Cross Seals 20 000. In the 1994 - 22 edition of the Fishing Industry Handbook - Namibia Venison & Marine Exporters lists his sealing concession products as producers of carcases and (seal) meal and a processor of seal skins - and in 2002, lists in addition seal oil and seal skin products. Sealion Products lists it simply as seal products.

On the 17th December 1999 owner of Sealion Products, Albert Brink to the Namibian newspaper, "concentrates only on the killing of seals for export of different parts".

Based on the above during the period 1992 - 2002, over 404 479 seal skins were exported (Cites International Trade) on a TAC quota of 467 000 seals. Representing an international trade of 87% on set annual quotas.( it must be noted that sealers have consistently reported being unable to fill their quotas - that it is safe to assume all seal harvests are for International Export and Trade).

Seal Alert-SA was told by a sealer that he could only harvest 80% of his TAC quota in 2005 as their were no more pups to harvest by end of season. From the above table for the period 1989 - 1996 by the Ministry of Fisheries of Namibia. We can see that although Fisheries set a "sustainable TAC" for the period of 258 800 seals - sealers were only able to harvest 173 229 or 67%. This raises serious concerns, namely;

Namibia has therefore been in serious violation of the CITES Convention of its seal exports involving over 400 000 seal products between 1992 and 2002 - and all the illegal activity in relation to each export infringement of each seal part or product thereof. Cites has no option but to act urgently upon this. Under the Convention a ban on all wildlife trade is appropriate - due to the seriousness of these sustained and continued violations. 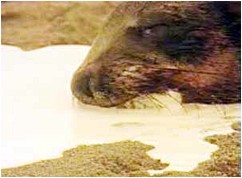 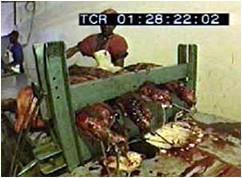 Conservation of the Species

Future survival of the Cape fur seal, can only be based on sound conservation management. In this regard habitat is equally important as population numbers. Special Scientist at Marine and Coastal Management (MCM) Department of DEAT - South Africa, Dr Jeremy David (formerly in-charge of sealing and seal conservation) stated, "Seals select offshore islands as their preferred breeding sites ....there are also six mainland colonies, five of which have become established only since 1940 .... as a result of exploitation the seal population had been reduced to very low levels by the start of 1900. In fact, at least 23 island colonies had become extinct by then .... seals have only recolonised 3 of them".

According to the Seabirds and Seals Protection Act No.46 of 1973 (South Africa), this legislation was adopted and still in use until 2000 by Namibia. A total of 46 offshore islands are listed, with a total land surface area of 1000 ha (Schedule 1 of the Act). The reality is that these former 23 seal island colonies represent 99% of the total protected island land. Since official population surveys were undertaken in 1972 - 98% of these former breeding seal colonies have remained extinct.

This fact alone, (loss of 98% of former breeding habitat) should weigh equally with CITES when deciding on the granting of export permits to Namibia. As the conservation or threat to the future survival of the species cannot be simply be based on pup population production numbers alone - Loss of former habitat and its continued extinction has to be considered as well.

CITES has stated that its convention does not cover aspects of welfare as different countries have different regulations. This however is not applicable in this specific species in Namibia. For the following reasons;

CITES needs to consider its "convention principles" very carefully in relation to the above. As Namibia now remains the only country and only sealing nation in the world - that ignores the scientific and conservation reasons why nursing pups should not be harvested when "nursing in birthing or breeding colonies". For the following reasons;

Based on this - CITES therefore has no option but to immediately stop the issuing of export permits for these skins or seal products to Namibia.


Findings of the 'Review of Significant Trade'

According to your telephone conversation you state that Namibia was placed on a 'Review of Significant Trade' in 2004 - but that the CITES Animal Committee did a review some time later, which found that Namibia's 117 400 exports in 2002 on a recently doubled sealing quota of 60 000 on a 3 year rolling TAC with a sealing season lengthened in 2001, from August to now July 1 - to allow the sealers and I quota, Minister Iyambo "past experience indicates that the season was not long enough for concessionaires to fully harvest their TAC" - was "not detrimental to the survival of the species".

The above section was copied from the 20th CITES Animals Committee Meeting in 2004 -
relating to the seal population. (I ask you to read it carefully).

I refer to the above, which appeared in the Namibia Brief in January 1998 - written by Namibian Ministry of Fisheries head of Marine Mammal Section, Dr Jean-Paul Roux. There are a number of very disturbing issues which appear to be overlooked by the CITES Animals Committee in 2004.

According to the information in your telephone conversation yesterday, you stated the CITES Animals Committee had reviewed Namibia seal exports and could find no detrimental evidence or a threat to the survival of the species. (Please forward a copy of these findings). 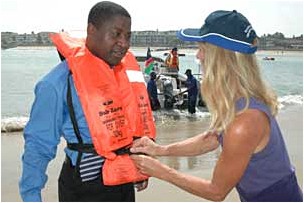 It is the opinion of Seal Alert-SA that CITES Animal Committee and or CITES Management Authority are themselves in serious breach of their own Convention, and as illegal skins have been seized, and as a South African has already been convicted of a criminal offence with possible imprisonment - the Sealers in Namibia, CITES Management in Namibia and CITES Animal Committee members for Africa should face similar criminal charges.

Based on all the above I believe that it is both factually and scientifically clear that Namibia has not been engaging in any form of "sustainable harvesting" since its independence in 1990. It is therefore in contravention of its own Constitution and all its exports have been in contravention and violation of CITES. Bearing in mind,

Without absolutely no sealing data or population trends, except un-official reports that mass die-off's are still occurring, year on year since 2002. It is understandable that over 12 million worldwide seal supporters in over 140 countries are extremely concerned about the developments in Namibia and the management of CITES.

When Seal Alert-SA received brief population trends from Chief Director of Islands in South Africa, Dr Augustyn in late May 2006. It was able to calculate that the 2006, sealing quota of 60 000 (unaware that it had been increased to 85 000), would in fact pose a serious threat to the future survival of this species and be detrimental to its survival. It then pursued every available means to transmit these concerns to South African and Namibian Officials, marine scientists, IFAW, WWF, IUCN, TRAFFIC and others - to date no response has been received. It was forced to go public. 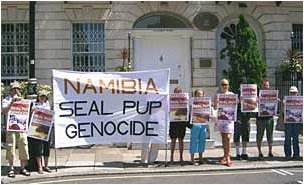 Since the 6th July 2006, the media both in South Africa, Namibia and Internationally have carried these headlines, two protests have already been staged outside Namibian High Commissions in South Africa and UK. 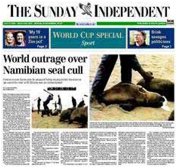 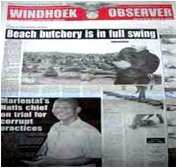 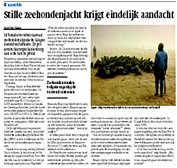 Some of the headlines that have appeared in South Africa and in Namibia, have read;

Even throughout all this headline news appearing since the 6th of July, and even a "question and answer" media session arranged by the Ministry of Fisheries in Namibia, and even though CITES Animals Committee was meeting in Peru between 7-13 July (which would have presented a perfect opportunity for CITES to intervene) CITES remained silent. Even emails to CITES Animals Committee, CITES Management Authority in Namibia and CITES Secretariat went unanswered, sent on the 9th, 11th, 13th, 24th July and 3rd and 6th August 2006 - (all unanswered and ignored), until my final telephonic contact with John Seller on the 8th of August 2006.

With on-line protest petitions calling for Namibia to stop the 2006 Hunt, supported by over 12 million people worldwide from organizations such as HSUS and its 9.5 million members, Oipa, Peta, IFAW to name just a few. I find it unacceptable, that CITES Secretariat states the following;

The 1st opportunity that CITES can formally address this is during our next Convention of Trade Meeting in October 2006.

This is unacceptable - in light of all the information contained in this email. CITES must, should and has to act now to stop this Namibian Seal Hunt - NOW !

It cannot allow Namibia to proceed with the harvest of 85 000 "living natural protected resources (seals)" in a harvest that is clearly scientifically and factually and unconstitutionally - will be detrimental to the future survival of the species, and threaten its survival - as it cannot permit the "legal" export of these seals, their skins or products - which will then just be discarded as waste.