Commenting on what it means to have the original “007” join the ranks of Sea Shepherd supporters, SSCS Founder and President Captain Paul Watson said, "We are fortunate to have Pierce Brosnan, Christian Bale, Richard Dean Anderson, Martin Sheen, William Shatner, and Marina Sirtis among Sea Shepherd’s devoted members and supporters. Today we gained a new Advisory Board member-Sean Connery. How can we lose? We have two James Bonds, Batman, MacGyver, a former ‘President of the United States,’ Captain Kirk, and Counselor Troi on our side.” 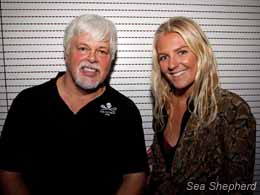 Paul Watson and Stephanie GilmoreServing with Connery on the Board will be one of the greatest surfers of all time, four-time Women’s World Surfing Champion Stephanie Gilmore. Stephanie joins Kelly Slater and world-renowned Free Surfer Dave “Rasta” Rastovich as the trinity of surfers on Sea Shepherd’s International Board of Advisors.

“Having Stephanie on our team with Kelly and Rasta places Sea Shepherd in very high regard in the surfing world,” said Captain Watson. “Surfers are the greatest human ambassadors for the sea and these three world-class athletes are each a very powerful voice for ocean conservation.  Together they represent a huge wave of support in our efforts to defend biodiversity and life in our seas.”

Joining Connery and Gilmore is writer, producer and director Sam Simon, who has worked on such critically acclaimed TV classics as Taxi, Cheers, The Tracey Ullman Show, The Drew Carey Show, and The Simpsons, which he co-created. Simon is the recipient of a dozen Emmys and a Peabody award.  Known also as a dedicated philanthropist, he works tirelessly on behalf of animals and the disabled. Simon recently hosted an exclusive Hollywood fundraiser for Sea Shepherd’s soon-to-launch Antarctic whale defense campaign, Operation Divine Wind.

In speaking of his new advisory role, Simon explained: “I’m proud to be a member of Sea Shepherd's International Board of Advisors and look forward to the day direct action brings an end to whaling and other outdated horrors.”

Connery, Gilmore and Simon join a slate of esteemed advisors from the animal protection, conservation, media, arts, legal, and business communities who all lend their expertise in support of Sea Shepherd’s mission to defend, conserve and protect ocean wildlife worldwide.