Captain Paul Watson, the founder and president of the international Sea Shepherd Conservation Society, is warning consumers in Hong Kong that the next meal of shark fin soup could be their last.

"I have received information from a reliable and trusted contact in Central America who has informed me that illegally obtained shark fins have been intercepted from poachers and washed in a solution of liquid containing 30% sodium cyanide.

About three hundred sharks fins were taken from drying roofs in Puntarenas, Costa Rica, bathed in the solution and returned to the roof to continue drying. The poachers were completely unaware of the removal and return of the fins.

Apparently, these cyanide marinated fins have now been processed for illegal transportation to Hong Kong and other Asian ports."

Captain Watson cited his source as a man named Juan Valdez. "I assume this is not his real name, but he has provided us with information on poaching vessels in the past and those coordinates were accurate, so I have no reason to doubt the accuracy of this information."

The contact said that the action was taken because of frustration at the lack of enforcement in Costa Rica against shark fin poachers.

"I don't know if this would qualify as product tampering considering that the product is illegal and smuggled contraband, but the concern for human life and health must be a primary concern and it is important that the proper authorities are aware that there is a cause for concern."

Added Captain Watson, "As much as I abhor the trade in shark fins and the fact that this trade is the cause for the diminishment of and potential extinction of numerous species of shark, I feel that it is irresponsible to endanger human life and that all measures should be taken to ensure that these fins are not sold on the market."

The following story was shared with Sea Shepherd. It shows that there is still a long way to go in educating the public (especially fishermen) about the devastating effect of shark finning. 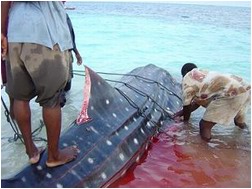 Recently travelled to the beautiful island of Zanzibar for 8 days of amazing diving, with plenty marine life to be seen...Green Turtles, morays, bluespotted rays, endangered Napoleon (Maori or humphead) Wrasse to name but a few. The dive centre we used (East Africa Dive Centre) was quite simply fantastic! Our diving gear would be ready for us on the boat each morning, and with their local knowledge, we were taken to the best dive sites around the north coast of Zanzibar.

Our last day (4th July 2005) before flying back to the UK was meant to be a relaxed day on the beach, enjoying the serenity of our surroundings. However, as we arrived at the beach/dive centre that morning, the Dive Centre Manager called us over and told us of the events that had happened that very morning. Some local fishermen had returned from their daily overnight fishing with a young Whale Shark being towed behind the dhow (local fishing boat), still alive and obviously very distressed. 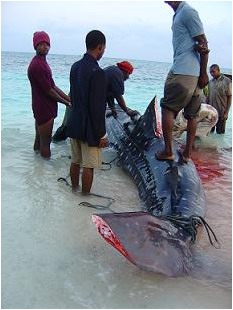 Some tourists had taken video footage and photographs of the fishermen as they cut the fins off the young Whale Shark. As fishing is their 'bread and butter', nobody could stop them or even explain that what they were doing was wrong. All they knew was that the fins would fetch a high price at the fish market. The Fisheries Department was called to come out and investigate further. I do not know what came of their visit, I can only assume a fine would have been imposed on the fishermen responsible. 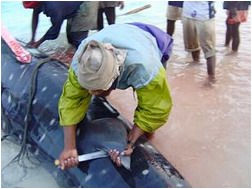 As a diving enthusiast, I felt sick and disgusted from the pictures I was shown of the Whale Shark being butchered. This all took place no more than 100 metres from where we would depart for our diving each morning. Why is it that still in the year 2005, with depleting marine life around the world, whaling and shark finning is still taking place? Why can't fishery departments educate the local fishermen about what they can or can't take from the sea, and explain the consequences for not abiding by the laws laid out?

I certainly hope my next encounter with a Whale Shark is below the water and not above, and that these images raise more awareness and concern to help save our oceans and all that inhabit her.