Sea Shepherd Voyages Through the Sea of Death

Sea Shepherd Voyages Through the Sea of Death 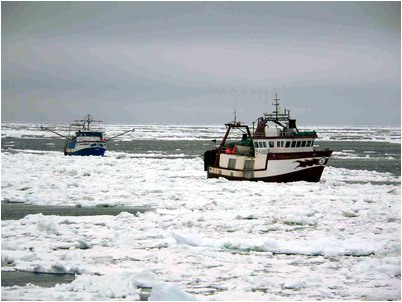 It was 93 years ago this week, and in this very area that the legendary White Star liner Titanic sank. It was April 15, 1912, when 1,500 passengers and crew died in the frigid ice strewn waters off of Newfoundland.

There is a gray bleakness and a lingering sadness that hovers over these waters. Added to the ghosts of the Titanic are the less innocent lost corpses of the S.S. Newfoundland disaster of 1914 and S.S. Greenland disaster of 1898. Forty-eight sealers perished under the command of Newfoundland Captain Abraham Kean on the Greenland and it was the same Abraham Kean who was responsible for the loss of 72 men from the Newfoundland. The Newfoundland sealing ship Southern Cross was also lost in 1914 with all hands, a staggering loss of a further 181 men. All were lost in the greedy pursuit of seals. This avarice was so perverse that Captain Abraham Kean simply stacked the bodies of his frozen crew on his deck and covered them with seal skins, refusing to return to port until he had taken his entire quota.

Of the 1898 Greenland disaster, the ship's surgeon wrote, "Somehow, we limped into St. John's with a cargo of dead seals under hatches and a cargo of dead men roped in a heap on the foredeck. I never went sealing again. Nor ever wanted to."

Both men and seals were expendable in the quest for profits by the men who owned the ships.

And every year men died, but many times more seals died. And they died in agony, by the millions.

The blood of men and seals mingles with the brine in these waters and I saw it last night as the setting sun flashed a scarlet glow across the "bergy" ice and black water, exposing symbolically for a moment, the sea of blood that lies beneath the surface.

This is the area where we now navigate in search of seals and sealers.

The world's largest mass slaughter of a marine mammal species begins in less than 24 hours. Today we are searching for the sealing fleet. We have passed numerous patches of broken ice and bergy bits and seen seals but we have yet to find the main herd or the hundreds of sealing vessels waiting to slaughter them.

We are one ship and 20 volunteers being shadowed by a Coast Guard ship that stays eerily silent, trailing us from a distance, watching our every move and relaying our position to the sealers.

The sealers have the resources of the entire government of Canada at their disposal. The seals have only us, the Farley Mowat.

This old ship has weathered much in the last two months. Two hull breaches, harassment from Canadian bureaucrats, near collisions with Coast Guard ice-breakers, locked into the ice where we weathered a severe storm, and our crew violently assaulted by enraged sealers. Many of the crew are tired yet undaunted. Our Chief Engineer Charles Hutchings and his assistant engineers have endured the stress of flooding in our engine room and successfully fought back the rise of water twice. Our First Officer Alex Cornelissen and our Bosun Adrian Haley have dove into the icy waters many times to insert and inspect the temporary wooden plugs that stopped the flooding until we could weld temporary patches into place underwater. Seven of our crew suffered blows and had their faces bloodied from the fists and hakakpiks of the sealing crew of the Brady Mariner. They now laughingly refer to those sealers as the "evil Brady bunch." The same crew also had to endure being arrested after the assault and charged with the crime of seeing a seal being killed. We have also seen volunteer crew depart in Halifax, Port aux Basques, Eastport, Maine, Charlottetown, and St. Pierre, France and their positions taken up by volunteer replacements. Of the crew of twenty on board now, only twelve of us remain of the original crew of twenty that departed from Bermuda on February 21st. In total, 42 volunteers from 10 different nations have participated in this campaign on this ship since February 21st.

This morning the dark shroud of this lonely sea is undulating with mild swells. It is grey overcast day, fitting for the eve of the largest marine mammal massacre on the planet.

Out there on the ice is hope and emerging awareness as young seals explore their new world, fascinated and captivated by each new experience. Tomorrow however, tens of thousands of these young creatures will suffer the final brutal and bloody experience of their short and young lives. They will be wasted and snuffed from existence - all hope in their young lives forever gone in yet another testament to the unforgivable horrific cruelty of this species we call humanity.

My greatest lamentation, my greatest regret on this planet and in my life, is that I was born a human being, and thus I have inherited the history and tradition of the death and misery that we have inflicted since the dawn of our time, both to other species and to each other.

Tomorrow these innocent creatures will die for our collective sins. They will die because we are an arrogant and ignorant species, divine legends in our own perverse self-glorified minds, and unfit to proclaim ourselves superior to anything. For of all these species on this Earth, we are the most deceitful, most violent, and most unnatural, and what we sow we shall reap -- thousandfold.