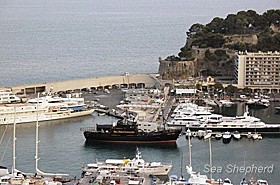 The Sea Shepherd ship Steve Irwin arrived in Port Hercule in Monaco on July 20th for a three day visit before proceeding on to Barcelona, the final stop in the Mediterranean campaign before the ship returns to Australia for final preparations for Operation No Compromise – our return to the Southern Ocean Whale Sanctuary to defend the whales from illegal Japanese whaling operations.

The last time a Sea Shepherd ship visited Monaco was in 1997 when the Sea Shepherd III was a guest of Prince Rainer on the occasion that Monaco hosted the 1997 International Whaling Commission meeting.

Monaco has been a very strong base of support for the Sea Shepherd Conservation Society for over 12 years.