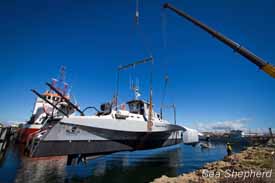 The Brigitte Bardot is lowered into the water by cranes to commence post-repair sea trials.
Photo: Simon AgerCaptain Pinho, who has take command of the vessel for the transit, described the journey ahead  “the run between Fremantle and Melbourne amounts to around 1750 nautical miles, a distance we can cover in between 5 and 7 days, depending on weather conditions. Brigitte Bardot has to be treated more like a small boat than a ship. Her speed and course have to be adjusted to the conditions. It is a difficult passage to time perfectly, as we have to avoid meeting rough conditions when rounding Cape Leeuwin and even more when arriving in Bass Strait- that can be tricky. That said, this ship is an incredible exercise in naval architecture, and still after 16 years there is almost nothing to compare her to on the water in terms of efficiency, and sailing Brigitte Bardot on the ocean is a great experience,” stated Captain Pinho, a Naval Architect in his own right.

“On arrival in Melbourne, we will dock near the Steve Irwin and continue to improve the Bardot and make her ready for upcoming campaigns,” stated ship’s manager Simon Ager, who has crewed onboard the Bardot since the day the ship was added to the Sea Shepherd fleet.

“Simon is undoubtedly one of our most dedicated and hard working crew members and I know after his efforts to repair the ship, he can’t wait to see Bardot in action again,” said Captain Locky MacLean who has supervised the refit since the vessel returned damaged from the Southern Ocean.

Sea Shepherd Australia Director, Jeff Hansen will miss having the Bardot in his hometown, but stressed that the ship and its crew had important work to do. Brigitte Bardot is scheduled to arrive in Williamstown, VIC on the last weekend of April, and will be open for tours on weekends at Seaworks Foundation docks, next to the Steve Irwin.