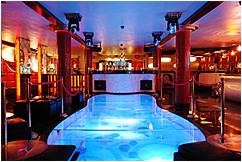 QUA Bottle Lounge features a concrete shark tank, covered by a 3-inch layer of acrylic, as the club's centerpiece.  Sea Shepherd Founder and President Captain Paul Watson and Executive Director Kim McCoy were appalled to learn of this facility, and even more surprised to find that QUA boasts on its website that it is "perhaps the world's first nightclub and lounge designed to raise awareness of global environmental concerns and marine wildlife preservation."

Sea Shepherd fails to see any connection between marine wildlife conservation and the confinement of sharks in an artificial environment.  Sea Shepherd objects to the disrespectful treatment of these animals as a night club novelty, lacking any recognition of their vital importance to marine ecosystems.  Illegal longlining and shark finning are rapidly depleting shark populations with serious ramifications worldwide.  If QUA truly cares about marine wildlife conservation, they will release these sharks into their natural environment where they belong.

Watson and McCoy have written a letter to QUA urging and offering to facilitate the release of these sharks.  We encourage you to respectfully voice your opinions to QUA to as well.

Click here to view a news clip illustrating people walking on the tanks.

Send your own letter to QUA: