New Zealand may be taking Tuvalu out for dinner and paying the bill but the little island nation is more interested in getting cozy with Japan afterwards.

"Tuvaluans have been bought by Japan, lock stock and barrel," said Captain Paul Watson, President of Sea Shepherd Conservation Society. "They will go to the International Whaling Commission (IWC) and they will mindlessly vote however Japan asks them to. They have become a nation of whores"

Tuvalu accepts aid from Australia and New Zealand, but Japan is a more generous patron.

This is bad news for next month's meeting of the IWC because Japan may have bribed enough nations to overturn the commercial moratorium on whaling. It is a scandal that a rinky-dink nation like Tuvalu with a total population of 8,000 has a vote equal to Australia, New Zealand, and the United States.

The IWC is not really a democracy; it's more like a brothel where those with the most money get to call the shots.

A senior Tuvaluan Government official was quoted as saying, "Our position has never changed since we joined the International Whaling Commission. We are for the sustainable use of whatever resources we have, be it whales, fish, forestry, land. Whilst we appreciate assistance from both countries, Tuvalu should be allowed as a sovereign nation to make its independent decision on what is best for its people."

What the Government official was really saying is, "Our position has never changed since Japan recruited us in to the IWC, paid our membership fee, and provided us with lots of cash and perks, especially all expense paid junkets for officials to Japan and places where the IWC meetings are held. We are for the exploitation of whatever resources we have, be it whales, fish, forestry, land. Of course, we don't kill whales ourselves but Japan does and we do what we are told by our masters in Tokyo. Whilst we appreciate assistance from both countries, Tuvalu should be allowed as a puppet vassal state to Japan to make its decision based on what is best for Japan."

The diplomatic failure for Mr. Carter and New Zealand comes as nations lined up with Japan meet in Tokyo today to plan their strategy for the IWC meeting from June 16 to 20 in the Caribbean nation of St. Kitts and Nevis.

Another subservient state to Japan is St. Lucia, where Japan has invested a lot of cash and equipment in order to secure their vote, including building a fishery complex, supplying millions of dollars worth of development grants, automobiles, and supplying fiberglass boats and outboard engines to the fishermen. 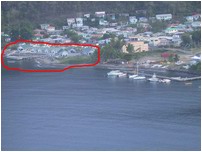 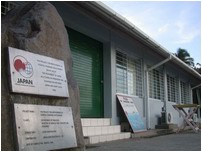 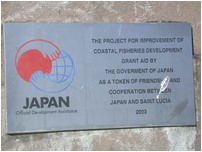 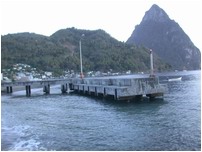 Plaque reads: The Project for improvement of coastal fisheries development; Grant aid by the government of Japan as a token of friendship and cooperation between Japan and St. Lucia. At right: Docks paid for by Japan. 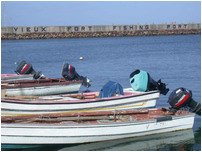 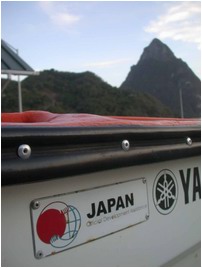 On paper, Japan has a majority of the 66 member nations in the IWC. To overturn the 1986 moratorium on commercial whaling would require a three-quarters majority. This is considered unlikely, but a simple majority vote would amount to a big win for Japan and fellow outlaw whaling nations Norway and Iceland.

Mr. Carter is to visit other Japanese dependencies like the Solomon's, Kiribati, and Nauru before the IWC meeting.

"The trouble is that New Zealanders are just too damn nice," said Captain Paul Watson. "These islands know they can flip off the Kiwis and still get their money. Carter has to start playing hardball and New Zealand must simply cut off all foreign aid to any nation that supports the slaughter of whales."

Will New Zealand do it? Most likely not. The trouble with being nice is that you get taken advantage of and New Zealanders are being taken for a ride by Japan in a Rolls Royce while the Kiwis serve them lunch.

Sea Shepherd urges all nations that care about protecting the whales, especially the endangered humpbacks and fins to immediately cut off all foreign aid to nations that vote with Japan to overturn the international global moratorium against commercial whaling.