For those who accuse Sea Shepherd of being criminals, Captain Paul Watson has only this to say: "If we are criminals, either arrest us or shut the hell up. I'm getting pretty fed up with whiners who can't back up their ridiculous accusations with the law. Cite a law that we have broken, cite a violation. The truth is that there have been no violations and we have not been charged with a single criminal act or maritime violation in six years of opposing these poachers."

Sea Shepherd, on the other hand, can cite laws, such as: the regulations of the International Whaling Commission, the Antarctic Treaty, the Law of the Sea, and an Australian Federal Court order prohibiting Japanese whaling in the Australian Antarctic Territorial waters.

So who indeed are the criminals? The poachers illegally killing endangered and protected whales inside the boundaries of an established international Whale Sanctuary, in violation of a global moratorium on whaling, and in contempt of an Australian Federal Court order, OR the Sea Shepherd Conservation Society, which is simply trying to stop these illegal activities, and doing so in a responsible manner without causing injuries or breaking the law?

"This is a long protracted campaign involving three vessels coming from three different countries under different flags and with volunteers from 18 nations. We are navigating the most remote and hostile waters in the world and we are opposing an increasingly aggressive opposition. We have lost one ship and had another damaged. But, we are cutting their kill quotas and costing them their profits and thus Operation Waltzing Matilda has been a success," said Captain Watson. "We will not retreat and we will never surrender the whales of the Southern Ocean Whale Sanctuary to the poachers from Japan." 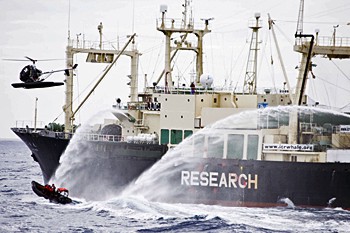 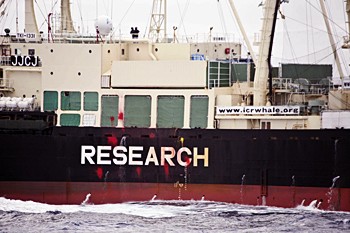