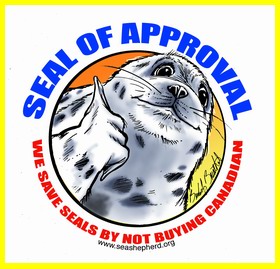 The Seal of Approval: Sea Shepherd Conservation Society has designed a Seal of Approval sticker that restaurants, stores, and related establishments can place in their window to proclaim that their establishment does not support the slaughter of baby seals, and therefore, will not serve Canadian-caught fish in support of the Boycott of Canadian Seafood.

The vibrantly-colored sticker features a harp seal with "flippers up" and the slogan "We Save Seals By Not Buying Canadian." These stickers are available to our members, supporters, and friends to present to restaurants and stores in their communities as well as to anyone who would like to display their support for the seals.


The Contest: Sea Shepherd is offering prizes to the person and organization who enlists the most establishments, restaurants, hotels, stores and distributors to sign onto the boycott and display the Seal of Approval sticker. The prize will be a flight to Prince Edward Island, Canada, in February 2006 and a helicopter trip to the ice floes of the Gulf of St. Lawrence to be photographed with the baby seals. The contest ends on October 15, 2005. If you are interested in participating in the contest, please contact us at sealofapproval@seashepherd.org.

The Boycott: Sea Shepherd Founder and President, Captain Paul Watson weighs in on the boycott, "The most powerful weapon that we have to oppose the slaughter of seals in Canada is the international boycott of Canadian seafood products. The boycott targets the very people who slaughter the harp seals, and who directly profit from the largest and cruelest marine mammal slaughter in the world. Sealers are fisherman, and every fisherman's union and fishing company in Canada defends and supports the slaughter of seals. We do not need to shut down the Canadian seafood industry to have the desired effect. We need only cost the industry enough to negate the profits of sealing and make the commercial seal hunt a personal, crushing, economic liability for all who condone it."

Canada's commercial seal hunt is about money. Canada is the fifth largest exporter of fish and seafood products in the world, with exports to over 100 countries. Canada's 2003 exports of fish and seafood products worldwide totaled $4.5 billion - $3.3 billion of that to the U.S. alone. The seal slaughter is worth $16 million dollars to the Canadian economy - which does not include costs and indirect subsidies.

"It is the only language that the Canadian government and the fishing industry understand," said Captain Watson. "Once the seal hunt begins to cause a loss in revenues for seafood products, they may decide that the annual slaughter is not worth the loss overall."

Many organizations in the Unified Opposition to the Canadian Seal Slaughter are working hard to promote the Boycott of Canadian Seafood. So far, Whole Foods Markets, Legal Seafoods, and Spectrum Organics have joined the boycott in the United States and the Marks and Spencer supermarkets in Great Britain have signed on.