Sea Shepherd to Return to Land to Refuel

Sea Shepherd to Return to Land to Refuel 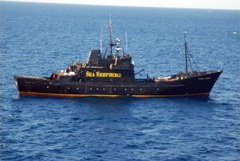 After chasing the Japanese whaling fleet for 2,000 miles from the extreme Western end of their hunting territory near Commonwealth Bay in the Australian Antarctic Territory, to the Eastern side of the Ross Sea, the Sea Shepherd ship Steve Irwin has been forced to cut off the pursuit to return to land for refueling.

"We have engaged them, we have stopped their whaling activities for two weeks and we have successfully chased them out of the Australian Antarctic Territorial waters," said Captain Paul Watson. "We now have to return to land to refuel. We don't have the luxury of refueling at sea like the Japanese fleet has. We don't have the resources to operate two ships down here and we don't have the support of Greenpeace to relieve us. We are doing the best we can with the resources available to us and we are having a significant impact on their kills."

The Steve Irwin has been on the tail of the Japanese whaling fleet for two solid weeks, keeping the fleet under pressure, preventing them from whaling and pushing them continuously to the East.

The harpoon vessel Yushin Maru #2, the first whaler that Sea Shepherd encountered this season, has not been seen since December 20th. "The Yushin Maru #2 is not with the fleet and we have no idea where it is, but that ship cannot kill whales independent of the factory ship Nisshin Maru," reported Captain Watson from the Steve Irwin.

The Steve Irwin will return to the nearest available port to refuel and then will head back out in pursuit of the fleet again as quickly as possible.