The Canadian Government is sparing no expense to make life difficult for those who oppose the slaughter of baby seals in Eastern Canada.

In April 2005, Watson was found not guilty of being too close to the Gulf of St. Lawrence seal slaughter. Watson had argued that the ship Farley Mowat was his place of residence so the rules on proximity to the seal killers should not apply. The Provincial Court judge agreed with this defense and dismissed the charge against him.

In Canada it is illegal to approach, witness, film, photograph, or document in any way the killing of a seal without permission from the government. Eleven Sea Shepherd crew were convicted under the regulations in November 2005. They were ordered to pay $1,000 fines each or face three weeks in prison. Sea Shepherd filed for an appeal on the fines. Not surprisingly, the Sea Shepherd appeal was denied. 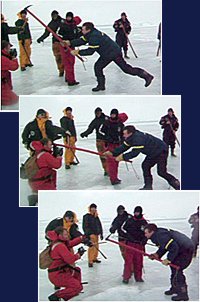 "It really is a no-win forum if you're opposed to the slaughter of seals," said Captain Paul Watson. "The sealers assault us on the ice and we document the assault. We identify the thugs who attacked our crew and the Mounties refuse to even investigate or lay charges against violent sealers. We simply observe a seal being killed and the law books are dumped on our heads. We're playing with the odds against us and the sealers have a stacked deck."

Despite this, Sea Shepherd has no intention of surrendering in the courts. Captain Watson has asked Charlottetown attorney John Mitchell to file an appeal to the Prince Edward Island Court of Appeals.

"Justice Wayne Cheverie is the former provincial Minister of Justice. He has the mindset of a politician and not a jurist," said Watson. "How can he accept the lower court's ruling that our rights were violated but that the government has the right to violate our rights? The only reason we have a Charter of Rights in Canada is to protect our rights from the government. We intend to appeal."

Of the 12 Sea Shepherd crew convicted of the crime of witnessing a seal kill, nine have refused to pay fines. Lisa Shalom, as the only resident of Canada, paid her fine. Dr. Jerry Vlasak opted to serve the three weeks in prison where he held a hunger strike to protest the seal hunt. Captain Watson has not been sentenced for his conviction.

On November 27th, the Canadian government appealed the ruling that "a ship was a place of residence" so as to prevent others from using this ruling to legally approach the seal killers on the ice.

Canada has also arrested and charged members of HSUS and independent journalists for violating the regulations although, in fact, the sealers had approached the seal defenders.

The regulations under which seal defenders and journalists have been arrested are the Seal Protection Regulations.  Even George Orwell would have been amazed at the audacity of the Canadian government in naming the laws that protect seal killers in this manner. The reasoning being most likely that the seals need to be protected from those who would protect them because it is in the best interest of the seals to be slaughtered for the benefit of the seal killers.

Sea Shepherd is pledged to fight all Orwellian court rulings. It may be a lost cause but as Sea Shepherd Advisory Board member Martin Sheen told us recently, "The only cause worth fighting for are lost causes."

Sea Shepherd activists have fought the Canadian seal slaughter since 1975. For 32 years, Captain Watson has been leading campaigns to oppose the killing.

"We will continue to fight this obscenity on the ice. On the sea, on the land, in the market place, and in the courts," said Watson. "We will continue to endure beatings, threats, assaults, and imprisonment in our efforts to oppose the killings. We will never surrender our obligation to protect and defend our clients - the defenseless seal pups - from the vicious and lethal assaults from those government protected barbarous thugs who slaughter them."

The seal killers of Newfoundland intend to target another 350,000 seal pups in March 2007. Seal defenders intend to continue to escalate the campaign to boycott all Canadian seafood products internationally.

Sea Shepherd is working on plans to promote a boycott of the 2010 Winter Olympics in British Columbia to oppose the seal slaughter.

The red maple leaf on a white background is the appropriate symbol for the Canadian flag. It represents the millions of gallons of deep red innocent blood that has been spilt upon the white ice floes off Eastern Canada.

"What we must do is strive to change the colours of this flag from red to green," said Captain Watson. "My father fought in Korea under the Ensign and not this tea towel flag. My uncles, grandfathers, and ancestors fought in World War II, The Great War, the Boer War, the War of 1812, and the Battle of Quebec under the real Canadian colours. They did not fight to see Canada become a nation of baby killers, environmental destroyers, clear cutters, fish exterminators, and nuke peddlers. As a Canadian, I am ashamed of this blood red on white flag and ashamed to be a Canadian. I will continue to be ashamed for as long as Canadian clubs continue to ruthlessly smash in the skulls of baby seals."