Sea Shepherd to Bring the Whale Wars to the Faeroe Islands

During the summer of 2010, a Sea Shepherd and Brigitte Bardot Fondation campaign to the Faeroes experimented with acoustical devices to keep the pilot whales away from the shoreline of the Faeroe Islands. The devices worked and Sea Shepherd will deploy a curtain of sound between the whales and their killers on the islands in 2011. 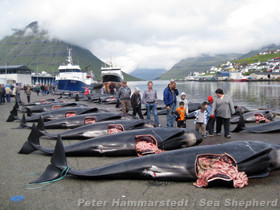 Sea Shepherd will also be bringing the cameras to the Faeroes to document the conflict with the Faeroese for television. “We will have crew on the beaches, on the water, under the water, and in the air,” said Captain Watson from Australia. “It is time to blow this horror show out of the water once and for all. The killing is a violation of the Berne Convention and Denmark needs to be brought to task. If the Faeroese are going to enjoy the benefits of the European Union, they need to abide by the laws of the European Union.”

Presently, the Faeroes claim exemption from European laws because they are a protectorate of Denmark yet they receive full European Union benefits.

“We challenge the Danish Navy to stop us because if they intervene to stop us from enforcing the Berne Convention, we will be able to accuse Denmark of failing to uphold European law,” said Captain Watson.

Sea Shepherd has a full-time crew, called the Cove Guardians, on the ground in Taiji, Japan in a six-month-long campaign to pressure the Japanese to stop the horrific slaughter of thousands of dolphins.

The summer of 2011 campaign to the Faeroes will be carried out by the “Shepherds of the Ferocious Isles.”

“We are fighting the horror of the dolphin slaughter in Taiji, Japan. We are opposing the Japanese whale poachers in the Southern Ocean and we are fighting the Faeroese to stop this nightmare called the Grind. This is a global struggle against the last hold-outs of barbarism against cetaceans,” Captain Watson said.