The Fukuyoshi Maru No. 68 is a large drag trawler. It's a fast ship and can easily stay out of reach of the Steve Irwin and never comes closer than 7 miles. The Sea Shepherd helicopter has flown over the ship and it is not equipped with any fishing gear that can be seen. No crew can be seen. There is evidence of electronic surveillance gear.

What is clear is that this ship has been commissioned by Japan for the sole purpose of tailing the Steve Irwin. There have been reports of armed Japanese police or military being placed on a ship and sent down to the Southern Oceans. It would make sense that they would do so covertly rather than openly. Sea Shepherd suspects that this is a government vessel or a vessel chartered by the government specifically as a defense support vessel for the Japanese fleet.

The Japanese whaling fleet is heading east according to confidential sources in Greenpeace who have relayed the position of the Greenpeace ship Esperanza to the Steve Irwin.

"We are back on their trail," said Captain Paul Watson. "We have some catching up to do but we are after them again. We do have some disadvantages. First because of the Japanese ship tailing us, the Japanese fleet knows our position at all times. Secondly, because Greenpeace is guarding the coordinates of the fleet, we have a delay in getting this information. I just hope that we can keep them running and that they don't begin killing whales before we reach them again."

It has been 11 days straight without a whale being killed. To kill whales, they will have to stop and if they stop the Steve Irwin will catch them.

"What I would really like to do," said Captain Watson, "is to rip one of those damn harpoon guns off the bow of one of their ships." 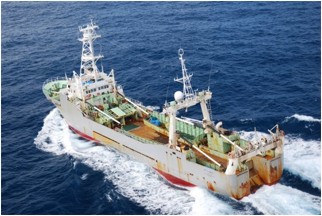 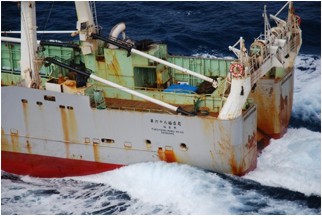