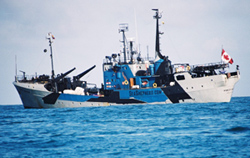 Ecuador recently signed an accord with environmental groups to work to create clean energy sources in its pristine Galapagos Islands after a 2001 fuel spill threatened its unique wildlife, conservation group WWF said in a statement.

WWF and local partner Fundacion Natura signed the agreement with Quito to put in motion projects aimed at creating a renewable energy system in the Galapagos, a top priority since a tanker spilled about 180,000 gallons of fuel in the archipelago in January 2001.

The accident raised concern among activists over Ecuador's ability to manage the islands located 625 miles west of its coastline in the Pacific Ocean. The islands are home to sea lions, iguanas, and exotic birds.

Under the program, Ecuador will replace old boat motors with cleaner ones, change diesel-powered plants for solar or wind energy, and recycle used goods in the archipelago over the next 10 years.

The Sea Shepherd Conservation Society has provided a fast 95' patrol vessel, the Sirenian to the National Park since December 2000, to help curb illegal fishing in the Galapagos National Park Marine Sanctuary. The Society provides four stroke outboard motors for our small craft on board the Sirenian and the Farley Mowat. The four stroke outboard engine does not leak fuel and oil like the two stroke engine does.

The Sea Shepherd Conservation Society is committed to utilizing four stroke outboards in our patrols.