The Sea Shepherd Conservation Society ships the Steve Irwin, Bob Barker, and Gojira originally found the Japanese whaling fleet on December 31st, 2010 before the whalers had an opportunity to kill a single whale. Unfortunately, two of the harpoon vessels blocked the approach to the Nisshin Maru and the factory ship was able to flee with the faster harpoon vessels tailing the two larger Sea Shepherd ships to relay Sea Shepherd movements to the fleeing Nisshin Maru. The Gojira was prevented from immediately pursuing the Nisshin Maru due to risky ice conditions.

The Sun Laurel headed north and east to put as much distance between the factory ship and themselves as they could. The Sea Shepherd ships followed knowing it was essential to cut off the supplies to the whaling fleet. Two of the three harpoon vessels followed and for 23 days we had confirmation that these two vessels had not taken a single whale.

With the Sun Laurel heading east and getting closer to Chile than New Zealand, Captain Watson seized an opportunity to break away and lose the tail, doing so on January 18th.  The Bob Barker continued to follow the Sun Laurel with one harpoon vessel continuing to follow the Bob Barker. The other harpoon vessel, having lost the Steve Irwin, left to rejoin the Nisshin Maru. 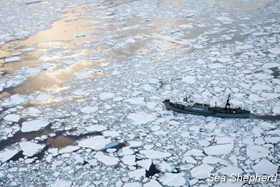 The Yushin Maru No. 1 cutting through the ice floes
(click to enlarge)The Gojira was following the progress of the Nisshin Maru by launching weather balloons equipped with remote cameras and radar detectors. Unfortunately, the Gojira developed a problem with their fuel pumps and Captain Locky MacLean elected to return to Hobart to replace the pumps. This decision was kept confidential in order to keep the Nisshin Maru on the run until the Steve Irwin could close in.

On January 23rd, Captain Watson made a risky decision to call off the Bob Barker from continuing the pursuit of the Sun Laurel. His concern was that the Nisshin Maru with two harpoon vessels could begin whaling operations in the Ross Sea within days.

The Bob Barker was instructed to head due south as a decoy to lead the Yushin Maru along while the Steve Irwin entered the Ross Sea.

And today after a 26-day pursuit, the Nisshin Maru has finally been caught and the Steve Irwin is on its tail. The Bob Barker some 300 miles away has been instructed to join the Steve Irwin.

Unfortunately, the Japanese whaling fleet appears to have just begun their illegal whaling operations. There is a whale presently being butchered on the deck. Sea Shepherd’s objective now is to make sure that whale is the last one taken this season.

The whaling fleet has been caught in an ice bay in the Ross Sea and is fleeing eastward into thick ice. The Steve Irwin intends to follow.

There is no doubt that this season will be a financial disaster for the Japanese whaling fleet.

“We are well on our way to economically sinking this whaling fleet,” said Captain Watson. “We will now chase them through the frozen gates of hell if need be, but we will stop their illegal whaling operations…I am confident of that!”

January 25, 2011
The Yushin Maru No 1 and Nisshin Maru
are spotted then flee through ice fields

all photos by Barbara Veiga