The Steve Irwin lost contact with the fleet when the ship's helicopter the Kookaburra was unable to fly due to dense fog and frequent snowstorms.

And now there came both mist and snow,
And it grew wondrous cold:
And ice, mast high, came floating by,
As green as emerald,
And through the drifts, the snowy clifts Did send a dismal sheen:
Nor shapes of men nor beasts we ken-
The ice was all between

-     Samuel Taylor Coleridge
-     The Rime of the Ancient Mariner

Sea Shepherd came through mist and snow
As all around grew cold
As massive icebergs drifted by
Cobalt blue and pearl white
Probing treacherous deadly rifts
For those cold hearted fiends
The question is not if but when
The ice is not between. 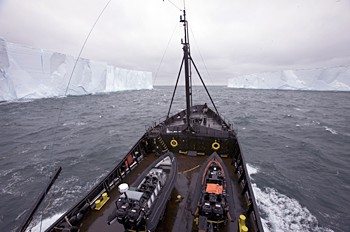