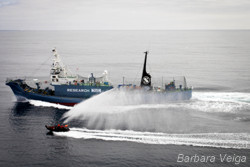 Sea Shepherd’s Delta team attempts to outrun the fierce spray from the Yushin Maru No. 3’s water cannons to ensure safety for their crew
(click to enlarge)Captain Paul Watson responded by saying, “I have seven years of experience in Southern Ocean waters so I do not need Prime Minister Gillard to tell me that this is a remote, inhospitable, dangerous place. I also don’t expect Australia or anyone else to ‘miraculously’ turn up to save us. We do indeed know how the world works. We are not wealthy yachtsmen racing around the world trying to set a record and thus deserving of assistance. We are not fishermen who expect and demand government assistance. No, we are marine conservationists trying to stop the poaching of whales in a whale sanctuary and we can take care of ourselves should the need arises, just as we always have.”

Even before the Steve Irwin left port, the Australian Maritime Safety Authority notified Sea Shepherd that Sea Shepherd’s crews were not to expect any assistance, and the Australian Department of Foreign Affairs notified all our Australian crewmembers that the government would be limited in their capacity to help with consular services or assistance.

The message: You’re on your own down there.

Last year when the Ady Gil was ripped in two by the Shonan Maru No. 2, her six-man crew was rescued immediately by the crew of the Bob Barker. The Australian government’s response was to assure Japan that the whalers would be absolved of any blame before even seeing any evidence of the collision.

“Yes, it is true,” said Steve Irwin’s Communications Officer Doug O’Neil of Tasmania. “Our government talks tough about saving whales, but when it comes to action they show their true colors as handmaids to trade and profits and thus they side with the Japanese government while pretending to defend the whales to the Australian public.”

“As for acting irresponsibly,” remarked Captain Watson, “I can’t think of anything more irresponsible than allowing poachers to slaughter threatened and protected whales in an internationally established whale sanctuary.” 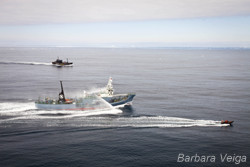 Sea Shepherd’s Delta team races to escape the quickly pursuing Yushin Maru No. 3 with the
Bob Barker serving as a safety back-up
(click to enlarge)