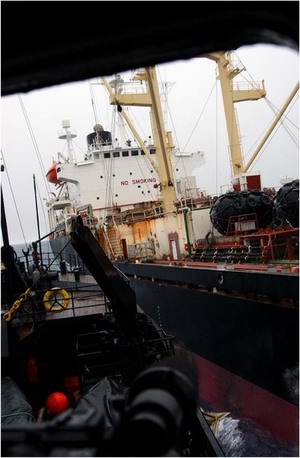 Captain Paul Watson ordered the Japanese-owned Panamanian ship Oriental Bluebird to leave the Antarctic Whale Sanctuary. The Japanese supply ship was waiting to rendezvous with the Nisshin Maru to continue the off-loading of whale meat for transport back to Japan.

"I informed the Oriental Bluebird that I was acting under the authority of the United Nations World Charter for Nature to uphold international conservation regulations prohibiting the slaughter of whales in the Antarctic Whale Sanctuary. When they refused, we backed up the message by slamming our starboard hull against their starboard hull."

There was no damage apparent to either ship aside from a long scratch along the hull of the Oriental Bluebird caused by a device attached to the Farley Mowat's hull called the "can opener." The blow was meant as a warning to convey the seriousness of our order for them to leave the area and to stop assisting with the illegal slaughter of whales.

After the collision, the Oriental Bluebird began running with the Farley Mowat in pursuit. Farley Mowat First Officer Alex Cornelissen reported. "We are not down here to protest whaling. We are here to uphold international conservation law. This ship is assisting an illegal operation and thus has no business in the whale sanctuary." 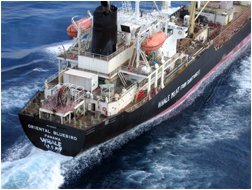 On the stern of the Oriental Bluebird are the words "whale meat" painted on the ship by Greenpeace activists yesterday. Says Cornelissen, "Greenpeace tagged the ship yesterday and we keyed it today."

The Oriental Bluebird, now referred to as the S.S. Whale Meat, is desperately trying to rendezvous with the Nisshin Maru. Sea Shepherd believes that the number of whales that the Japanese are taking exceeds the carrying capacity of the factory ship and that it is essential for the Nisshin Maru to offload whale meat in order to continue. There is simply not enough room on the Nisshin Maru for 935 piked (minke) whales and 10 fin whales.

The Oriental Bluebird flies a flag of convenience, registered in Panama, and is operated by New Shipping Kaisha Ltd, Tokyo, Japan. The ship, formerly known as the Hiyo Maru, is a fleet replenishment vessel built in 1979. It is a double-hulled ship, approved for carrying oil as cargo, and is 143 meters long with a dead-weight of 9,751 tons. The Oriental Bluebird is listed as a supply ship for illegal, unreported and unregulated fishing in a report titled "Flags of Convenience, Transshipment, Resupply and At-Sea Infrastructure In Relation To IUU Fishing" prepared in 2004 by International Oceans Network for the World Wildlife Fund. 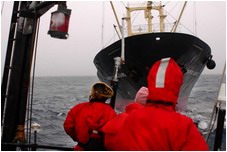