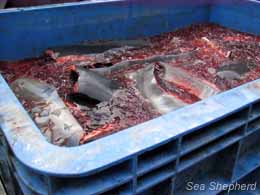 Butchered dolphinsOnce the story hit social media it spread like wildfire. SSCS Hong Kong decided, after receiving no response to calls or emails, to “do it the old fashioned way” and pay Hong Kong Airlines a visit. Armed with a copy of The Cove and a petition started by the group Save Misty the Dolphin, the activists entered the lobby of the airline’s corporate offices. “The staff obviously had no idea who Sea Shepherd was and probably were not even aware of the dolphin crisis about to hit them,” said SSCS Hong Kong Coordinator Gary Stokes. After Stokes handed over his business card and the airline employees had a chance to research Sea Shepherd, the mood changed considerably. The activists were asked to move to another area, as the airline was holding a recruitment day and 300 prospective employees were also gathered in the lobby. Stokes declined and stated that as they were merely attempting to drop off a petition and DVD, it would only take a few moments.

As potential staff strode past, they were greeted by school children proudly holding images of the Cove slaughter while standing in front of a large model aircraft. The activists had asked to speak to management and were forced to wait for quite some time. Emotions began to rise among the airline employees, who resorted to calling the group thugs and punks. “We continued to stand politely and peacefully, awaiting someone from management who could accept the letter. It was like a hot potato that nobody wanted,” expressed Stokes.

After finally being allowed to hand the material to a member of management, they were escorted out of the building. While in the elevator the airline employee exclaimed, “this is not the conventional way to do this!” To this Stokes responded, “You’ll realize we don’t always do things the conventional way, but we get the results!”

Since dropping off the petition and other material, the support has been momentous. When the petition was dropped off, it had already accumulated 2,400 signatures in 48 hours. After three days it passed the target of 5,000 and has grown to include over 6,000 supporters, while still increasing rapidly. Several high profile organizations including the Humane Society have written to the airline threatening a boycott if they continue to transport dolphins. In the meantime, the airline has issued two direct replies to Sea Shepherd Hong Kong.

“Personally I see this incident as something far bigger than just Hong Kong Airlines, this is the crack in the dam that we have all been waiting for. This action should send a message to all airlines that the consequences of transporting dolphins will result in such global negative publicity as to affect a loss of business that will far outweigh any short-term financial gain from the transfers. If we can stop the international transportation, this should then stop the captive trade and therefore if there is no dolphin trade, there will be no dolphin slaughters as the money will have disappeared,” said Stokes.