Sea Shepherd Ships Refuel for a Return to the Chase

The Sea Shepherd ships will continue to pursue the Japanese whaling fleet, intervening against their illegal whaling activities until the end of March 2012.

Captain Alex Cornelissen had to return to his duties as Sea Shepherd Director for the Galapagos. First Officer, Peter Hammarstedt of Sweden, has been promoted to Captain of the Bob Barker. 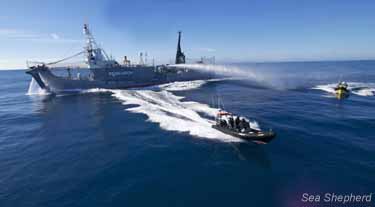