The Sea Shepherd Conservation Society's ship Steve Irwin will be returning to Melbourne and is estimated to arrive at Victoria docklands, wharf 3 around 1400 Hours on February 2nd.

The Steve Irwin continues to be tailed by the Japanese registered Fukuyoshi Maru No. 68. The vessel has been following behind the Sea Shepherd ship for more than two weeks and it appears to be following the Sea Shepherd vessel all the way back to Australia. According to media reports in Japan the Fukuyoshi Maru No. 68 has a crew of armed Japanese coast guard officers onboard.

The Steve Irwin will be returning to the Southern Ocean Whale Sanctuary just as soon as it can be refueled, re-supplied, repairs completed and some crew positions relieved.

"I would like to turn the ship around within 10 days," said Captain Paul Watson. "We have new crew flying in from around the world. We have ordered the spare parts we need and we are anxious to return to defend the whales. This is a retreat for supplies only, we have not surrendered the Sanctuary to the whale killers. We will be back as soon as possible."

It appears that one of the objectives that Sea Shepherd had set has been reached. "There have been no reports from the Oceanic Viking of whales being killed to date. This means that our goal of seeing that whaling was halted until the end of January has been reached," said Captain Watson. "Our next objective is to shut down Japanese whaling operations for another three weeks and I think we can do it."

"It's been a long voyage for many of the crew and because we are volunteers, about half the crew have to leave to return to jobs and family," said 2nd Officer Peter Hammarstedt. "The rest of us are a little tired but we remain enthusiastic about stopping the poaching of whales in the whale sanctuary. We have already hurt the Japanese fleet economically. They will not get their quota. We need to get back out to sea and stop the harpoons for another three weeks. Every whale saved is a victory."

Australian citizen Benjamin Potts who boarded the harpoon vessel Yushin Maru No 2 will be returning to sea to resume the chase of the whaling fleet.

The Sea Shepherd Conservation Society will be seeking donations of funds, provisions and volunteer support in Melbourne. 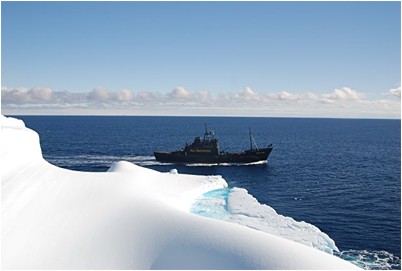