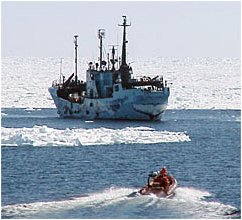 The Farley Mowat was diverted to Newfoundland after a hull breach was discovered this morning at 9:10am AST. The ship was off St. Paul Island just north of the Cabot Strait when the engineers detected water levels rising in the engine room.

The cause of the breach is unknown although it is expected that there may be ice damage from the heavy ice floes.

"The first thing we need to do is determine the source of the leak," said Captain Paul Watson. "The next thing is to put a temporary patch on the hole and then we can make preparations for a permanent repair."

It is not known if the ship will be able to continue with the campaign. This will depend on the nature of the damage. There is still time to repair the ship and be back in the ice for the beginning of the seal hunt on March 20th to 25th. The exact date for the start of the hunt has not yet been set by the Canadian government.

A Sea Shepherd crew, consisting of Captain Paul Watson, cameraman Peter Brown, and Sea Shepherd director Richard Dean Anderson were flown by helicopter, prior to the hull breach, to the ice to be with the seal pups today.

The Sea Shepherd ice crew fulfilled their first task of the campaign with a celebrity photo shoot with Richard Dean Anderson, the star of the legendary television show MacGyver and the popular SciFi channel series Stargate SG-1.