The Farley Mowat arrived in Bermuda on August 18, 2007 to undergo preparations for campaigns in 2008 in the North Atlantic.

The Farley Mowat dropped anchor in Hamilton Harbour after an 11,500 mile voyage from Melbourne, Australia. The ship and crew stopped briefly at Pitcairn Island and for a month in the Galapagos before proceeding via the Panama Canal to the Caribbean and north to Bermuda.

Along the way, the crew of the Farley Mowat were able to intercept and confiscate illegal longlines that were targeting sharks, manta rays, and large fish. Numerous marine animals were freed from the deadly hooks and released.

Captain Alex Cornelissen took the ship from Melbourne to the Galapagos, and Captain Paul Watson, Founder and President of Sea Shepherd Conservation Society, took the vessel from the Galapagos on to Bermuda.

"Bermuda has always been a friendly port of call for Sea Shepherd ships," said Captain Watson. Sea Shepherd has stopped in Bermuda many times over the years. The original Sea Shepherd was a guest of the British Royal Navy from March to June 1979, and the Sea Shepherd ship Whales Forever stopped in Hamilton, Bermuda in 1994. The Farley Mowat stopped over in Bermuda from December 2004 to March 2005 and returned in April and May 2005.

"This is a small group of islands with an affinity for the sea and an appreciation for marine conservation. It's always a pleasure to stop over in Bermuda," said Captain Watson. 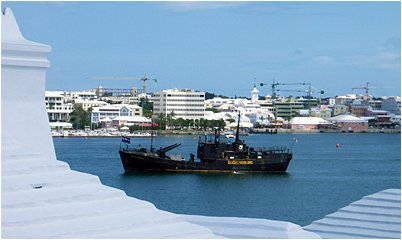 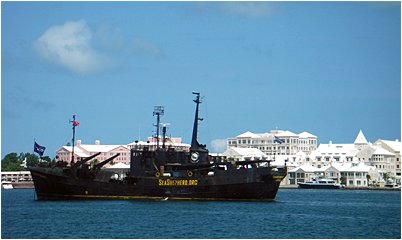