Sea Shepherd Sets Conditions for the Release of the Farley Mowat

Sea Shepherd Sets Conditions for the Release of the Farley Mowat

The Sea Shepherd Conservation Society today has set the conditions for the Canadian government to release the Farley Mowat. The 657 ton Farley Mowat was taken by armed force by agents acting under the direction of the Federal Department of Fisheries and Oceans in waters outside the Canadian twelve mile territorial limit.

At no time did the Farley Mowat, a Dutch registered yacht, ever enter the twelve mile territorial limit. Therefore the Sea Shepherd Conservation Society considers this action to be an act of high seas piracy.

In addition to seizing the ship and terrorizing crewmembers on board with firearms and excessive force, the agents acting like pirates seized personal property of crewmembers who were never charged with any offense by the government of Canada.

It is the opinion of the Sea Shepherd Conservation Society that when armed men board a ship at sea in international waters and steal property at gunpoint that such an act can be legitimately defined as piracy.

The Sea Shepherd Conservation Society demands the release of the Farley Mowat under the following conditions:

These are the five conditions that the Society demands for the release of the ship.

The Sea Shepherd Conservation Society is prepared to wait for a verdict in the case against Captain Alex Cornelissen of the Netherlands and First Officer Peter Hammarstedt of Sweden. The Society is confident that the evidence will exonerate both men of the ridiculous charges brought against them by the Canadian Department of Fisheries and Oceans.

Once an acquittal is granted against both men, the Society will launch a law suit against the government of Canada for damages to the ship during the time it is held by the Department of Fisheries and Oceans. Such damages will be for physical damage caused deliberately and by neglect by the government and for loss of usage during the time of seizure. The Society will also ask for punitive damages for high seas piracy.

If in the unlikely event that the two accused are convicted, the Society will request an appeal and will hold the same conditions for release of the vessel. The Society will not under any circumstances pay for berthage or maintenance costs while the ship is being illegally detained by Canadian authorities.

"The actions of the Canadian government were excessive to say the least," said Captain Paul Watson. "Two of our officers have been arrested, our crew robbed at gunpoint, our ship seized in international waters and torn apart by authorities looking for videotapes and digital images of seals being killed. When did a camera become an instrument of terrorism? When did taking pictures of an atrocity become a crime? The evidence will demonstrate that not only was the Farley Mowat outside of Canadian waters at all times but that the Farley Mowat and her crew never once approached dangerously close to any sealing boats. The evidence will show that the sealing boats approached the Farley Mowat. I am warning the government right now, don't you dare destroy any of the evidence that you have seized. You have our GPS documentation and you have our video and pictures and we demand that you produce this evidence in court. We intend to see you in court and we intend to see that justice prevails and that this government sanctioned act of high seas piracy is exposed."

Captain Alex Cornelissen and First Officer Peter Hammarstedt have been deported to the Netherlands and to Sweden and told not to return to Canada. This makes it difficult for them to appear for trial which leads the Sea Shepherd Conservation Society to believe that perhaps the government is trying to force them to jump bail by making it impossible for them to return to court.

This case is like a sealed box of rotten fish that is about to be opened and the stench will be tremendous when the decaying fish see the light of day. The government of Canada will have to clean up the mess. 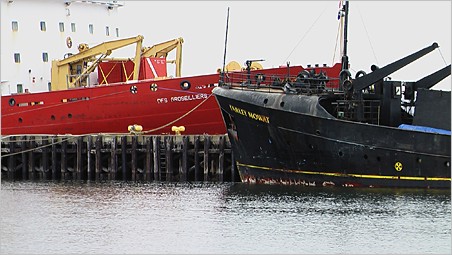