On July 1, 2007, at 08:15am, deckhand Amber Paarman spotted a suspicious motorboat from our ship's crow's nest, at a distance of 6-7 nautical miles (nm) south of the Farley Mowat's position. A thorough search of the surrounding area commenced as Captain Alex Cornelissen immediately suspected poaching activities. All hands were called on deck when a series of buoys were sighted running perpendicular to the bow of the Farley Mowat. The longline carried none of the required bird-scaring devices and was set to target yellow-fin tuna.

A call was made to Sean O'Hearn-Gimenez, director of operations Sea Shepherd Galapagos, who informed First Officer Peter Hammarstedt that the line was undoubtedly illegal and in violation of the rules and regulations of the Galapagos National Park. At 08:30am, the crew began pulling in the line, freeing any and all animals unfortunate enough to fall victim to the poachers, and seizing all of the illegal fishing gear.

Second and third lines were spotted, and both were subsequently confiscated. During the course of the enforcement action, a Sea Shepherd zodiac was deployed to gather evidence on the poaching vessel which continued to illegally set monofilament line at a distance of 5 nm from the Sea Shepherd ship. Video was taken which will hopefully lead to the prosecution of these law-breakers. When the poachers realized that they'd been caught red-handed, they began throwing equipment overboard, eager to destroy evidence, which was later confiscated. The video evidence will be handed over to the GNP.

After five hours, all lines were safely onboard the Farley Mowat never to kill again. In total, 30 nautical miles of illegal longline were confiscated, including 270 baited hooks. Fifteen three-foot long yellow-finned tuna were found dead on the line. But there were live releases, too: Two yellow-finned tuna, one sting ray, and a five-foot manta ray were released during the rescue effort and were last seen swimming off in the distance, given a second chance at life by Sea Shepherd volunteers intent on seeing this UNESCO World Heritage Site protected.

Enforcement actions by Sea Shepherd in the Galapagos over the past month have included the seizure of over 19,000 illegally-taken shark fins with the cooperation of the Ecuadorian Environmental Police and in investigation uncovering the destruction of protected mangroves in a wetlands ecosystem.

More breaking news from the Galapagos! Read about our bust of sea cucumber poachers! 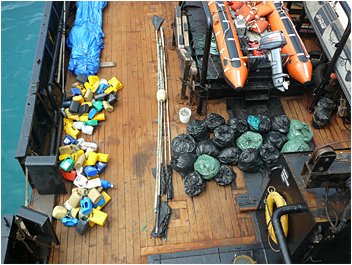 Large plastic bags hold the confiscated longlines; the plastic jugs
were used as make-shift flotation devices to buoy the longlines