The Sea Shepherd vessels Robert Hunter and Farley Mowat caught the Japanese whaling vessel Kaiko Maru bearing down on a pod of whales. The conservation vessels moved in and chased the whaler into the ice. 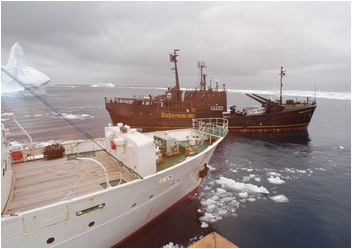 The Kaiku Maru (in foreground) approaches the Farley Mowat

At one point during the confrontation, the Kaiko Maru turned to starboard and struck the Robert Hunter.

The Sea Shepherd activists are demanding that the whaler leave the Antarctic Whale Sanctuary and cease and desist from illegally killing whales. 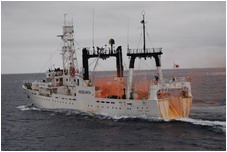 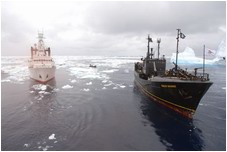 The white vessel is the whale-spotting vessel Kaiku Maru; the black ship is the Farley Mowat

Sea Shepherd is in Antarctic waters to protect endangered whales from the Japanese fleet which has plans to illegally slaughter over 900 whales in the Antarctic Whale Sanctuary this year - including 935 piked (Minke) whales and 10 fin whales.

The objectives of the Sea Shepherd vessels are to enforce international conservation law against illegal Japanese whaling operations in accordance with the principles established by the United Nations World Charter for Nature.