Two missing crewmembers from the Farley Mowat were found and safely rescued eight hours after being lost at sea following a confrontation with the illegal Japanese whaling fleet. 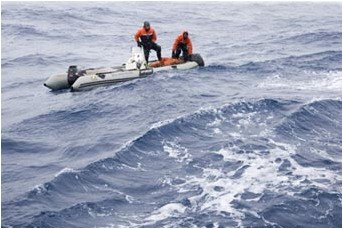 The Zodiac inflatable carrying 2nd Officer Karl Neilsen, 29, of Australia, and Engineer John Gravois, 24, of the United States, fell back from the other Sea Shepherd ships after its fiberglass hull cracked and filled with water. The damage was caused when the inflatable struck the steel hull of the whaling vessel Nisshin Maru in heavy seas. The two were quickly lost as heavy fog, snow, and sleet conditions suddenly occurred.

Captain Paul Watson immediately put the Farley Mowat into a search grid and then issued a maritime distress call and was joined by the Sea Shepherd ship Robert Hunter. Because it was an official distress, the Japanese factory vessel was obligated to participate and joined in the search. The search lasted eight hours.

The crewmembers were found by the Farley Mowat; both were unharmed and slightly cold. They were spotted by Farley Mowat Quartermaster Jaime Brown of New Zealand. They were both wearing wetsuits under survival suits. Karl and John were glad to be rescued and were not suffering any ill effects.

Captain Paul Watson called the Nisshin Maru to thank them for their assistance in the search and then said, "We're all back on schedule." At this point, the two Sea Shepherd ships resumed their pursuit of the Japanese whaling fleet as conditions continue to worsen, and winds and swells increase. 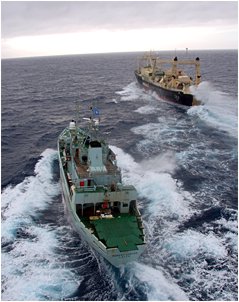 The two Sea Shepherd ships Farley Mowat and Robert Hunter have been searching for the Japanese whaling fleet for five weeks and finally located them at 0500 Hours (Auckland time) this morning.

Sea Shepherd is in Antarctic waters to protect endangered whales from the Japanese fleet which has plans to illegally slaughter over 900 whales in the Antarctic Whale Sanctuary this year - including 935 piked (Minke) whales and 10 fin whales. The objectives of the Sea Shepherd vessels are to enforce international conservation law against illegal Japanese whaling operations in accordance with the principles established by the United Nations World Charter for Nature.

To read more about our activities earlier this day, click here.