The fishermen say that we do not understand them, and ask how we dare, as foreigners, to come to their home and press our values upon them. What they fail to see is that we are the same.  We are all earthlings, and as such have a responsibility to this planet and the other life forms on it.  The oceans are dying, and the captivity and slaughter of these dolphins hastens that death. Once the oceans are dead, we too are dead—all of us.

There were some Japanese right wing nationalists on site today hassling Matt.  They were parading around with their bullhorns and loud speakers mounted on cars accusing Matt of dropping the atomic bombs of World War 2.  No one was listening.  They also threatened Matt by telling him that a large group of their comrades were coming to Taiji on the morrow and that if he were smart, he would be gone.  They said, “There is just one of you and many of us.”  Well that has changed.  There are now three.  In time there may be more as folks heed the call to come and shine light on this dark and bloody secret.

There were also a number of Japanese at the park overlooking the cove this day.  Most were sympathetic to the fishermen.  There was a couple though that stood in disbelief at what they were seeing.  They told Matt that they had just recently heard of Taiji’s secret and came to see for themselves. They would never have believed it had they not seen it. The woman cried openly and unashamedly.  “This is not the way it should be”, she said.  “This is not my culture.” 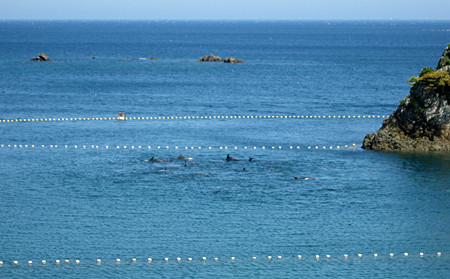