"Go away! You are not allowed to help!" 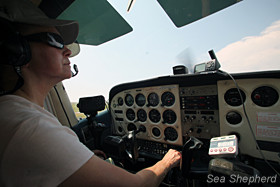 Sea Shepherd volunteers arrived in the Gulf a month after the spill.  On May 22, Bonny Schumaker (Second Officer on the Bob Barker in our 2009-10 anti-whaling campaign in the Southern Ocean, and a member of Sea Shepherd's Board of Directors) and Kurt Lieber (also a Sea Shepherd Board member) flew together from California to New Orleans, Louisiana in Bonny's small single-engine plane nicknamed "Bessie." Bonny uses Bessie for tracking and transporting wildlife and domestic animals in need, usually for the nonprofit organization On Wings Of Care, Inc. (OWOC).  This summer Bessie became Sea Shepherd's full-time 'Eye in the Sky' in the Gulf, tasked with finding endangered marine life and seabirds of all kinds, locating surface oil for scientists and workers in boats, and transporting the media out to see and report to the world what was really happening.

When the team arrived, we battled rules and restrictions that kept them from reaching the polluted places and the animals that desperately needed help.  First, no airplanes were allowed to fly lower than 3000' above ground or water (except airplanes used by BP or authorized government agencies).  This made it impossible to find dolphins, sea turtles, oiled pelicans, or even huge animals such as sperm whales and whale sharks.  Second, no boats were allowed in so-called 'sensitive areas' such as the inland bays or ocean coastlines, where dead turtles and severely oiled birds were known to be.  And finally, people were forbidden to walk along the beaches in these areas!  These rules stopped a lot of groups and individuals, even the media for the most part.  But the Sea Shepherd volunteers stayed determined, and that led to people and work that eventually removed the restrictions.

First by air...
At first, the only option was from the air.  There were scientists from many government agencies and research institutions (NASA, USGS, NOAA, NGA, USCG, etc. -- you'll have to Google them!), who wanted to find and study the oil from boats or with high-altitude imaging instruments. But their satellite data was often as much as 12 hours old, not high resolution, and the strong offshore winds and currents moved things around before the boats or instruments could follow up and find them. They needed a spotter plane ahead of them guiding them to the targets.  We offered our services.  They signed Bonny up with the "Unified Command Post," and Bessie became an official spotter plane!   In July alone, we flew almost 50 hours for these scientists.  While we were flying for them we used every minute to find, track, and document the changing states of the offshore islands and bays and the positions and status of marine life --- dolphins, rays, turtles, sharks, pelicans, and other seabirds.  It wasn't long before other scientists, environmental groups, local fishermen, videographers, and media had heard of us --- and soon we were helping all of them.  By early September, we had flown over 250 hours in the Gulf, 'low and slow' from about 100 miles south of Pensacola, Florida all the way west to south of Lafayette, Louisiana.  We found and documented over 24 whale sharks (some of which we helped tag with GPS transmitters), sperm whales, a pod of seven orcas, hundreds of bottlenose and spinner dolphins, a variety of sharks (hammerhead, tiger, mako), manta and devil rays, and last but not least some of our crew's favorite Gulf animals -- the sea turtles (leatherbacks, loggerheads, hawksbill, green, and Kemp's Ridley).   And we saw thousands of sea birds -- unfortunately not all of them in very good condition.  Almost all of this wildlife was found at least 50 miles away from the BP well that caused all this trouble.  Around 'the Source', as they called that well, we found very little healthy wildlife.

Then by boat...
By mid-July, we began taking boats into the Gulf regularly.  The rules were not being enforced as tightly by then, and thanks to our aerial spotting, we knew just where to go and how to get there "unobtrusively."  We phoned in all sightings of wildlife in need, but the restrictions would not (and to this day still do not) allow us to directly assist any wildlife.  So we offered our services to obtain samples of the water and oil in sensitive ecosystem areas, especially in the coastal areas and in the Mississippi Sound.  We worked with several different laboratories and scientists, who sent us their special equipment and instructions (sterile glass jars, special absorbent material for oil, large coolers for storing and transporting all of the samples, handheld GPS instruments to log coordinates and record conditions, along with much other detailed paperwork).  This is not easy work, and it requires great attention to detail.  Many days the seas were rough and some of us would have preferred to sit it out -- but we didn't.

We took photographers and videographers to the offshore islands to document conditions there, and we were instrumental in getting authorities to some places quickly to pick up oiled booms and to clean beaches where we found young pelicans, tern chicks, and other birds at risk or already oiled.   We also helped to collect dead seabirds for scientists who could analyze them and determine the cause of death.  Some of those birds had evidence of oil inside them, some looked starved, and others looked in good health but with empty stomachs.  Special laboratory tests have been performed to determine if chemicals from the dispersants contributed to their death.   The sheer numbers of dead birds on these islands was staggering; this was among the saddest of our work in the Gulf.

We regretted that the restrictions kept us from doing more and from being able to use some of the more qualified of our volunteers, including wildlife veterinarians and certified boat captains, who were ready to join us on a ship we were going to bring to Gulf as a floating support facility for rescuing oiled wildlife and other needed work.  By the time the restrictions were lifted enough that we could bring the ship, very few animals were still being found that could be rescued.  All the talk by officials about trying to relocate thousands of young seabirds from the offshore islands before hurricane season never turned into action, so there was no such effort for us to support.   However, by staying and offering our services wherever we could, we wound up being very useful not only to the scientists studying oil and the wildlife, but also to the local fishermen and residents concerned about local coastal fish populations; this work will continue for as long as they need our help. 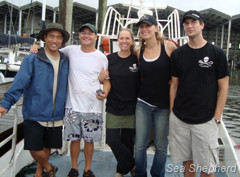 Our volunteers!
On average about 15 Sea Shepherd volunteers were actively involved with this work over the summer, plus four boats and Bessie the airplane.  The majority of our volunteers received 24- or 40-hour HazWOPER training and were experienced in boat handling and ocean diving; several also had prior experience in oil spills and oiled wildlife.  Some were veteran volunteers; some were new.  Some of their names we'll list here; others are included in our special thanks below.  Hats off and tails up to our superb air and boat volunteers this summer, in alphabetical order:  Tom Bremer, Brock Cahill, Kevin Compton, Alex Feld, David Hance, Charles Harmison, Burt Lattimore, Rex Levi, Fiona McCuaig, Dean Miya, Jerry Moran, Bonny Schumaker, Nick Schearer, Ian Ziatyk.

Our plans
We are scaling back some of our Gulf operations to prepare for the Southern Ocean "Operation No Compromise" anti-whaling campaign.  Half-dozen volunteers will do another round of intense sampling in early November, both offshore and in the coastal areas, and they will be available periodically throughout the winter as needed.  Barring unforeseen events that might require our assistance sooner, we will return to the Gulf in the early spring of 2011 by air and land and sea, to help again in whatever ways the residents, the fishermen, the scientists, and most of all the Gulf wildlife, need most.

Our thanks!
This summary would not be complete without thanking at least a few of the new friends Sea Shepherd made in the Gulf during this challenging time, local people who by their generous contributions of skill, time, equipment, and services made it feasible for us to be effective in the Gulf this summer.  We can't begin to name them all, or properly describe all that they have done for us, but here is a short list of the names of some extraordinary people to whom we'd like to give a ton of thanks (alphabetically):