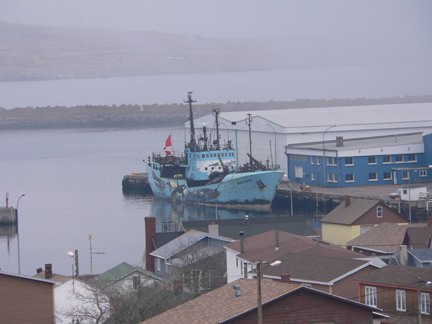 The Sea Shepherd flagship Farley Mowat departs from the French colony of St. Pierre and Miquelon today. Our destination is the largest seal slaughter in the world where 320 sealing vessels are waiting to begin a horrific massacre of baby seals.

The Farley Mowat and our crew of international volunteers have been in St. Pierre since April 4th. The ship was able to take on fuel, oil, and provisions. A few crew have gone home and more have arrived.

The people of St. Pierre have been very supportive. St. Pierre police officers purchased a half a dozen of our "Cold as Ice Tour" shirts. The crew received donations of food and gear and discounts on oil and fuel.

The Farley Mowat is only two days from the ice floes, the seals, and their killers.

This voyage marks the first time that any ship has voyaged up the coast of Newfoundland and into the midst of the Newfoundland sealing fleet.

Already, we have been receiving threats. On the CBC Radio Newfoundland's Fisherman's report, Maureen Anderson interviewed Captain Paul Watson and implied that the sealers were angry and they had rifles.

Captain Watson answered, "If a sealer shoots me or a member of my crew, I can guarantee that will be the end of your seal hunt."

Articles in the April 8th edition of the St. John's Telegram also made veiled threats. Captain Ren Genge, the sealer who has admitted assaulting Sea Shepherd crew was quoted as saying, "You've got a bunch of people out there fed up. If there were guns involved that day, I don't even want to think about what might have happened."

Genge was referring to the incident in the Gulf of St. Lawrence. He also knows there will be plenty of guns on the Front.

Captain Watson is not concerned about the guns. "Our business is to sail into harm's way. Our business has always been to put ourselves between the weapons and their victims. We are used to dangerous situations. Our business on this trip is to observe and document the mass slaughter of seals and to bring this atrocity to the attention of the international public. We are not up here to attack sealers or to cause them any harm. The sealers see the camera as a weapon to be feared, and they should fear it because it is the most powerful weapon in the world. It is the camera that will bring these barbarian baby seal killing thugs to their knees. If they meet our cameras with guns, they will lose and that is a fact."