Sea Shepherd Requests the Support of a Greenpeace Ship

This is the most effective year for saving whales yet. The Japanese whalers have been severely compromised in their ability to kill whales. We estimate their kill quota has been diminished by two-thirds. 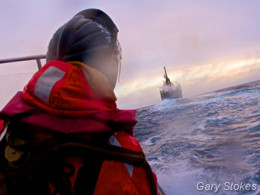 Delta Crewmember sets sight on the Yushin Maru
in the distanceAll that is needed to shut down the Japanese fleet by 100 percent, is a third large vessel to keep the third harpooner occupied, but Sea Shepherd does not have another large vessel. The Greenpeace Foundation, however, has one ship in Taiwan. One Greenpeace ship in the Southern Ocean could shut the door on the killing of whales completely, and all Greenpeace would have to do is just show up.

Greenpeace is raising substantial funds in their ‘campaign’ to defend whales in the Southern Ocean, although they have not sent a ship to confront the Japanese fleet in these waters since 2006. Sea Shepherd believes that Greenpeace has a moral obligation to use these funds to end whaling in the Southern Ocean in the most effective and efficient manner possible.

Sea Shepherd is formally requesting the assistance of the Greenpeace Foundation to cooperate in achieving the total shutdown of illegal Japanese whaling activities. Even one Greenpeace ship would make an enormous difference down here in the Southern Ocean Whale Sanctuary. Sea Shepherd would provide Greenpeace with the whaling fleet’s coordinates, and a Greenpeace ship could be on site in as little as two weeks.

The opportunity to end whaling in the Southern Ocean Whale Sanctuary permanently is here now. We have a chance to send the Japanese whaling fleet home with their holds empty and their harpoons blood-free.

Greenpeace does not have to support Sea Shepherd’s tactics or even communicate with Sea Shepherd’s ships and crew other than to receive the positioning as we are tailing the Japanese fleet. A Greenpeace ship simply needs to show up.

Surely Greenpeace must realize that the protection of these magnificent whales must come first, prior to any grievances Greenpeace may have with Sea Shepherd. This is an opportunity to show the world that cooperation between organizations can bring about positive results.

The lives of hundreds of whales can be spared by the support of one additional ship to distract the whalers from their victims. Greenpeace has the ships, and they have the resources, they simply need to get involved. Not for the sake of Sea Shepherd, but for the whales and for their supporters who want to see an end to the whale slaughter in the Southern Ocean.