On June 18th, Sea Shepherd Founder and President Captain Paul Watson attended a special gathering organized by the Traditional Up the Hill Longhouse of the Mohawks at Kahnawake just south of Montreal. 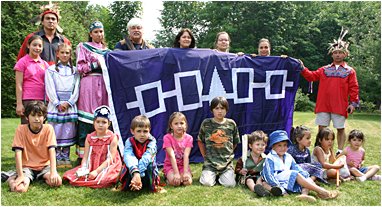 The Up the Hill Longhouse is one of the three longhouses of the Mohawks at Kahnawake.

The gathering was organized for the purpose of presenting the registry and the flag of the Five Nations to the Sea Shepherd Conservation Society for the ships Robert Hunter and Farley Mowat.

The presentation of the Mohawk flags for the Robert Hunter and the Farley Mowat is an historical event. Never before has there been deep-sea, foreign-going ships flying under the colors of the Mohawk nation or any other indigenous American sovereign nation.

In presenting the flags to Captain Watson, Stuart Myiow of the Mohawks said, "Sea Shepherd is protecting our mother earth and we decided we should support their efforts and give them the protection of our flag."

Captain Watson was also presented with a special handmade traditional shirt by the women of the Longhouse.

"I am deeply honored to accept this shirt and these flags from the Mohawks at Kahnawake," said Captain Watson. "I was never proud of the Canadian flag but this is a flag that I can be proud to sail under. We intend to bring the Mohawk colors to the far ends of the oceans to protect life and habitats for the future generations of all of our relations of all species." 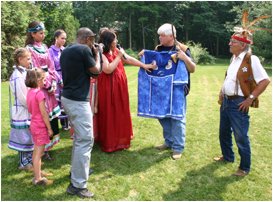 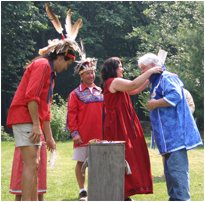 Also attending the ceremony where the flags were handed over to Sea Shepherd were Sea Shepherd crewmembers Ryan Young and Lisa Shalom of Montreal and Emily Hunter from Toronto. Emily attended with her mother Roberta Hunter to receive the flag of the Five Nations for the ship named in honor of her husband, the late Robert "Bob" Hunter, who was the co-founder of the Greenpeace Foundation along with Captain Paul Watson.

The flying of the Mohawk colors will open up some controversial legal issues involving indigenous rights that Sea Shepherd is quite happy to champion.

"The fact is that if we are going to save this planet we need to align ourselves with traditional communities that really care for the Earth and our Oceans. In our world today, governments represent corporations first, the voters second, and the environment last." Said Captain Watson. 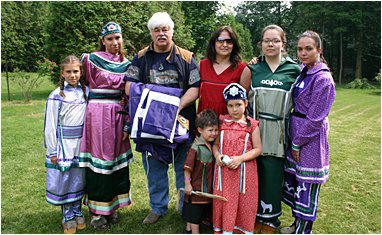 Listen to Captain Watson on the CBC program As It Happens about the receiving of the flags.