Following is a series of reports on recent events in Fremantle, Western Australia:

Captain Alex Cornelissen of the R/V Farley Mowat gave a passionate lecture on the plight of the World's Oceans at the Spare Parts Puppet Theatre in Fremantle. Alex spoke from his personal experiences, urging Western Australians to get actively involved in Sea Shepherd's campaigns to stop the Canadian Seal Slaughter and end the massacre of whales in the Antarctic.

At the lecture, Heidi Taylor from Tangaroa Blue presented the crew of the Farley Mowat with over AUD $500 in coins, collected by the children of Dunsborough Primary School. When the children of Dunsborough first heard about Sea Shepherd they decided to organize a fundraising event at their school and took the initiative to speak with their principal. For a AUD $1 coin, children could wear casual dress for a day.

The crew of the Farley Mowat wishes that they were in Tangaroa so that they could personally thank each and every one of these children. We are so proud of them for taking action and showing that they believe that a world without whales is not a world in which they would like to live in. They will be with us in thought as we journey south to confront the Japanese whaling fleet

Ship's Liaison Officer, and former 2nd Mate of the R/V Farley Mowat, Peter Hammarstedt introduced a video presentation of past Sea Shepherd campaigns at the Spare Parts Puppet Theatre in Fremantle. Video footage from the past campaign in Antarctica as well as the 2005 Seal Defense Campaign was shown.

Supporters from Western Australia, ranging from onshore fundraisers to high-level politicians, gathered on the stern of the R/V Farley Mowat to welcome it to Australia.

Greg Nannup from one of the First Nations of the Western Coast, the Noongah, honored the crew of the Farley Mowat with a "Welcome to the Homeland" ceremony. The whales are a foundation of Aboriginal legend, manifest in the Story of Creation. According to the Noongah, whales carry human spirits, stranded at sea at the dawn of creation, during the rise of the Continent.


On behalf of the Nannup, Greg presented Captain Cornelissen with a ceremonial knife. Louis Olney of the Yamheji also honored the Sea Shepherd flagship with her beautiful jazz-singer's voice. The Noongah and the Yamheji Country stretches from the South West corner of Australia up north, nearly to Exmouth, and covers a majority of the migration route of whales enroute to the Antarctic.

The Honorable Jim McGinty, Attorney-General of Western Australia, living up to his reputation as a politician not afraid to take a stand, toasted to the crew of the Farley Mowat and wished them the best in their mission to shut down the Japanese whaling fleet. The Hon. Jim McGinty was quoted in the Western Australian earlier in the week as saying that "he 'absolutely' supported Sea Shepherd and anyone who criticized them was 'frankly being a bit too soft'" in response to Federal Environment Minister Ian Campbell's unsubstantiated accusations of "endangering lives" in the Antarctic.

Onshore Volunteer John McBain hosted the evening and presented the crew of the Sea Shepherd flagship with a poem - "So lets all stand and drink a toast, to the intrepid Sea Shepherd crew".

The Honorable Federal Minister of Western Australia, Carmen Lawrence, expressed her wishes to attend the function, but was delayed by other obligations. 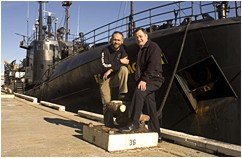 By invitation of the Town Hall of the City of Fremantle, the crew of the R/V Farley Mowat was today honored at the Councillor's Lounge by the Mayor of Fremantle Peter Tagliaferri. Both City Councillors and the Honorable Jim McGinty, Attorney-General of Western Australia, were in attendance.

Interviewed by city television, the Hon. Jim McGinty stated that he believes that diplomacy has failed with the Japanese on the issue of whaling and it is for that reason that he supports the "aggressive" tactics employed by the Sea Shepherd Conservation Society. Mayor Peter Tagliaferri also expressed his support by stating that the City of Fremantle will do everything in its power to support the mission to shut down the Japanese whaling fleet.

On behalf of the Farley Mowat, Captain Alex Cornelissen accepted the Crest of the City of Fremantle along with the flag of Fremantle. It is with great pride that Captain Cornelissen will mount the Crest in the bridge wheelhouse of Sea Shepherd's flagship. The Mayor requested that Fremantle's flag be flown during the Antarctica Campaign and the crew of the Farley Mowat have promised to honor that request. As we set sail for the Antarctica, the City of Fremantle will be with us in spirit. There is no doubt that Fremantle is a friend to the whales. And history will look upon the Hon. Jim McGinty and Mayor Peter Tagliaferri as two politicians who were not afraid to take a stand and transform talk into action.

The Farley Mowat crew would like to express their sincerest thanks for the incredible reception that they've received by Mayor Peter Tagliaferri, the Hon. Jim McGinty, and the City of Fremantle. When the ship departs from Fremantle for Melbourne, it will do so with the highest regard for the people of Western Australia. 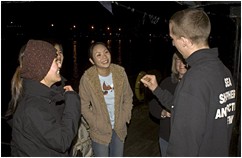 Crew member and Japanese supporters,
who donated vegan sushi for the cocktail