It remains possible that whales may be killed after the Steve Irwin and the Brigitte Bardot leave patrol, but June, July, and August are the three most notorious months for the slaughter of the whales as they are peak migration months. Our objective was to prevent the killing of any whales during this period and that objective has been realized, therefore, Operation Ferocious Isles has been extraordinarily successful.

Additionally during the duration of the campaign, the crews of our two Sea Shepherd ships were able to meet and speak to hundreds of Faeroese youth. We were pleasantly surprised to find so many young people in opposition to the grind.

Sea Shepherd had hoped to make a public presentation but unfortunately, our request was denied by the Faeroese government, although our presence generated a great deal of publicity both in the Faeroes and in Denmark.

Significant campaign achievements include increasing international awareness of the whaling that takes place in the Faeroes, provoking controversy and discussion amongst the local people, increasing spending for the Danish Navy and police during the Sea Shepherd’s time in Faeroese waters, and most importantly, preventing a single grind from taking place.

The two Sea Shepherd ships will return to Great Britain to begin to make preparations for a return voyage to the Antarctic waters to once again intervene against illegal Japanese whaling activities in the Southern Ocean Whale Sanctuary.

The Steve Irwin will host a fundraising event on the Thames (river) in London on September 13th. 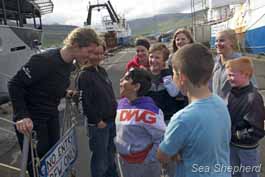 The crews of the Steve Irwin and the Brigitte Bardot are very happy with the results of this year’s campaign and are anxious to return and once again intercept the Japanese fleet to prevent them killing whales off the coast of Antarctica.

“Over the past few months we saw whales, we deterred whales from approaching the islands, we prevented the killing of whales by just being here. We could not be any more pleased with the results of the campaign. Zero kills translates into a perfect campaign and we are extremely happy with the results of our efforts this summer,” said Captain Paul Watson.

This has been a very busy year for Sea Shepherd beginning with our victory over the Japanese whaling fleet by driving them out of the Southern Ocean Whale Sanctuary a month and a half before their season ended and preventing them from killing 83% of their intended kill quota. Since our victory in the Southern Ocean, we have captured poachers in the Galapagos, confronted tuna poachers off the coast of Libya, protested at the 63rd Annual International Whaling Commission meeting in Jersey, exposed the atrocities of the seal slaughter in Namibia, helped catch the criminals who viciously clubbed seal pups in New Zealand, reduced the number of dolphins killed in Taiji, Japan by half, and now, we can relish in this victory for the pilot whales here in the Faeroes.

Never before has Sea Shepherd been so active and effective on a truly international level.

And the reason for our successes is your continued support. We do the best we can with the resources available to us and increased support translates into increased activism.

Our support base is steadily growing thanks to the momentum of recent documentary films featuring Sea Shepherd including Eco-Pirate: The Story of Paul Watson, Minds in the Water, and Confessions of an Eco-Terrorist. And of course, thanks to Animal Planet’s hit television series Whale Wars now in its fourth season.

“What gives me such satisfaction is knowing that because we have intervened, because our ships have been on the water around the world, that so many marine lives have been saved,” said Captain Watson. “When I think of a mother whale and her calf swimming free in the sea because we silenced the harpoons this year, I feel deeply and warmly satisfied, that all our efforts have been worth the rough seas, the long voyages, the dangerous confrontations, and the political harassment. And to be at sea surrounded by hundreds of pilot whales that we were able to keep away from the killers onshore – that was the highpoint of our summer.”

Read more in Captain Paul Watson’s An Open Letter to the People of the Faeroe Islands.

The Northern lights were dancing,
On the waves across the sea.
The stars of heaven hovered,
Across our shimmering galaxy.

A refrain from down the ages,
So in haunting in its song.
These ancient isles shall tell us,
Our love must make us strong.

The wind it swirled around me,
As we stood there off the shore,
And listened to their song,
Like we never heard before.

The whalers they may find them,
No choice may ours to be.
Yet we defend life proudly,
For this truth will set us free.

Memories recalled across the years,
Of rages and of strife.
Of cetacean misery,
And the horrific waste of life.

We wondered where love was,
In the face of so much pain.
I looked into the sea below,
To find it once again.

We travelled the wide oceans,
Heard many call us names.
With harpoon and gun and hatred,
The insanity of human games.

Some used the whales for glory,
Some use them for their gain.
But Sea Shepherd intervenes,
To cleanse the cruel human stain.

Is it not our place to wonder,
As the sea does weep with tears,
And all the ocean’s creatures,
Look on with mortal fear.

With the trident in one hand,
In the other, the shepherd’s crook,
We try to regain the balance,
To return what man has took.

And as the cold wind carried,
The whale’s  song into the night.
We closed our eyes and dreamt,
Until the morning light.

We saw the pilots swimming,
They did swim into our lee,
It was in this magic moment,
Came this song from mother sea.

Our hearts were all a dancing,
On the waves, out on the sea.
The whales turned from the shore,
And from the islands they did flee.

A host of ghosts on the beaches,
So haunting in their song,
These ancient isles have shown us,
That our love has made us strong.

-By Captain Paul Watson, inspired by and with lines borrowed from “Beneath a Phrygian Sky” by Loreena McKennitt