It looks like the task of stopping the illegal Japanese whaling is now in the hands of the Sea Shepherd Conservation Society. Australia has backed down from aggressively opposing Japanese whaling operations opting to support Japanese Australia trade relations over the interests of the vast majority of Australian citizens.

When the Prime Minister of Japan says jump, Australian Prime Minister Kevin Rudd is now responding with a "Yes sir, how high should I jump sir, sorry to have offended you sir, please buy our wood chips and uranium and we will be good little Aussies sir. "

Environment Minister Peter Garrett has decided to step back and watch his bed burn.

Not only has the Rudd government failed to make good on their promise to Australian voters to defend the whales, they are now retreating from the controversy entirely.

Meanwhile the former Environment Minister in the Howard government, former Senator Ian Campbell will be going to Santiago Chile to attend the International Whaling Commission as a representative of the Sea Shepherd Conservation Society.

What is ironic is that the Rudd government is retreating within sight of a victory for the whales over Japan. The Solomon Islands have already backed away from voting with Japan at the IWC meetings and this week, Dominican Prime Minister Roosevelt Skerritt announced that Dominica will reverse eight years of support for Japan's position.

The up-coming meeting of the IWC in Santiago, Chile promises to be very unusual. Sources in the New Zealand government have indicated that Japan may pull out of the Southern Ocean Whale Sanctuary because of economic losses, rising fuel prices and concern for escalation of tactics by the Sea Shepherd Conservation Society.

They are correct in assuming that Sea Shepherd will escalate tactics.

"We intend to hit Japan harder than ever with new tactics, new equipment and with a renewed determination to shut down their illegal whaling activities. We will never retreat and we will not compromise - there can be no acceptance or compromising with the taking of endangered species inside an established whale sanctuary in violation of a global moratorium on whaling," said Captain Paul Watson. "We don't compromise with eco-terrorists."

The Greenpeace Foundation has chosen to ignore Sea Shepherd's offer of cooperation once again.

"We have not heard a word from Greenpeace in response to our offer," said Sea Shepherd Executive Director Kim McCoy. "It really is tragic. Together, Greenpeace and Sea Shepherd could virtually shut down all illegal whaling activities in the Southern Ocean.  By ourselves, we will likely only be able to reduce their quota by 50%, as we have done for the last two years--unless we can secure a 2nd ship.  Greenpeace must understand that it cannot stop illegal whaling with banners and cameras.  The whales need--and deserve--aggressive intervention."

"The best defense of the whales is an aggressive offensive campaign," said Captain Paul Watson. "And we intend to offend the Japanese with all the resources we can bring together."

The Sea Shepherd ship Steve Irwin is being refitted and supplied in preparation for a November departure to intercept the Japanese fleet.

"If by some miracle we can secure the funding for a second ship we will do so, but we will be sending the Steve Irwin and an international crew of volunteers and we will be deploying new strategies backed by new equipment," said Captain Watson. "This will be our most dramatic, most confrontational, most controversial and most effective campaign yet. We intend to save more whales next time than we did last time and that is a goal we fill confident in achieving"

But that's the point.

Rudd reassured Australians demanding international legal action against Japan that he had always wanted to try the diplomatic route first, and reserved the right to go to courts later.

Now, six months after promising to take up the fight against whaling in the Southern Ocean with a vigour unseen in decades, Rudd left Tokyo yesterday with no visible diplomatic gain.

Instead, using the failed language of the Howard government, he said the two countries "agreed to disagree".

This increases fears that the Rudd Government has shied away from offending the business attached to Australia's largest export customer, and will tone down its campaign.

It's strange, because polls repeatedly show that action against whaling is a no-brainer to Australians. In the most recent Essential Research poll this week, 91% of respondents said we should take international legal action, even if it meant compromising our relationship with Japan.

Australia drew attention to the whaling with the audacious decision to send the patrol ship Oceanic Viking to monitor the fleet.

The $1 million cost seemed a relatively small price compared with the global reverberations achieved by the release of the images of whaling.

But the evidence Oceanic Viking gathered remains to be tested.

Advice commissioned from Oxford international law professor James Crawford has gone to the Government, its contents unknown. Legal action remains in the back pocket.

Meanwhile the Japanese whaling lobby is approaching a critical point in its ambition for a return to a commercial kill at the International Whaling Commission in Santiago in 12 days' time.

In recent years Australia, more than any other country, has lobbed verbal grenades at Japan for its relentless attempts to take control of the IWC. Now Rudd is emphasising the importance of the IWC reform process as well.

He can be sure that if countries such as Australia fail to exert all their powers to stop Southern Ocean whaling, environmentalists such as the hardline activists of Sea Shepherd will. 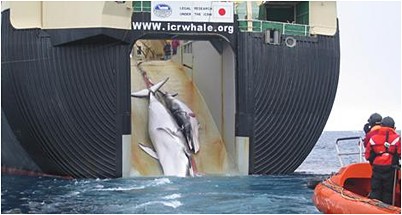