The two Japanese ships followed and illegally entered the Australian Economic Exclusion Zone where they have been prohibited by order of the Australian Federal Court and the Government of Australia. 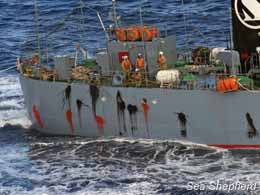 The Yushin Maru No. 3's hull obliterated with black and red paint. Photo: Billy DangerAfter a day at Macquarie Island, the Steve Irwin made the move northward to Auckland Island, New Zealand as a change of plans to refuel with the Bob Barker. The Yushin Maru No. 3 and the Shonan Maru No. 2 followed.

Meanwhile, the Bob Barker was putting hundreds of miles between them and the two ships waiting for the refueling operation that we never intended to actually happen.

The Bob Barker will continue to chase the Japanese whaling fleet for the remainder of the season, to the end of March if need be, while the Steve Irwin returns to Australia.

“We have placed the Japanese security ship, the Shonan Maru No. 2, and the harpoon vessel, the Yushin Maru No. 3, a great distance from the whaling operations and the factory ship Nisshin Maru. It could take them more than a week to return. It was a very successful ploy that has allowed the Bob Barker to be free of its tail and to knock out two of the Japanese ships from the game for more than two weeks,” said Captain Paul Watson.

Captain Peter Hammarstedt, of Sweden, is now in command of the Bob Barker. He replaced Captain Alex Cornelissen who needed to return to his duties as Sea Shepherd director of operations for the Galapagos.

“The Japanese ships fell for the bait, following hard on our heels first to Macquarie Island and then onto Auckland Island. They have wasted tons of fuel and weeks of time to accomplish nothing more than to escort the Steve Irwin back north. Now they have no one to follow anymore and the Bob Barker is free to continue the chase,” said Captain Watson.

With only three weeks left in the season, the whalers are running out of time fast. They have not had much time, or the harpoon vessels, available to realize their quota.

“Because we lost our scout vessel, the Brigitte Bardot, we have been handicapped this season. But despite that, we have chased this outlaw fleet more than 16,000 miles from west to east and from north to south. I am confident that we have severely impacted their kill quota once again.” 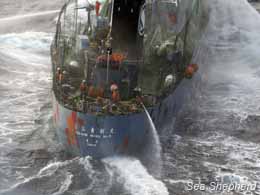