Sea Shepherd believes there is a security force accompanying the fleet this year. This force or part of it is most likely on the Shonan Maru No. 2.

The Sea Shepherd crew has prepared the ship to repel any boarding attempts by the Japanese security forces if they should attempt an assault.

“This is costing the Japanese government a lot of money and the more they spend to protect their illegal activities, the more we will like it,” said Captain Watson. “Our objective is to bankrupt them.” 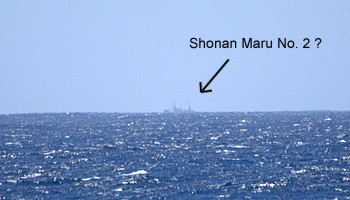