"It was a very successful trip," said Captain Watson. "We have a great deal of support in Western Australia and it was very encouraging to hear the views and the deep concerns that Western Australians have for the whales."

Captain Watson did live in-studio interviews with Simon Beaumont on Radio 6PR and Matthew Perkins of RTRFM Radio and appeared on the Evening news on Channel 10.

In the evening the groups The Chemist and Dekatur and DJ Scott did a benefit performance for Sea Shepherd at Mojo's Bar and Café in North Fremantle.

Friday, November 2nd began with an interview with the Fremantle Gazette and an appearance at the studio for Geoff Hutchison's Morning Show on 720 ABC Radio.

The day was completed with An Evening with Captain Paul Watson at the Fremantle Town Hall organized by Elise Styenberg, Fleur Shack, Gavin Storey, Louis Bell, Jeff Hansen, and Marina Adams. Captain Watson was introduced by Mayor Peter Tagliaferri and Senator Scott Ludlum of the Green Party.  Stephen Quayle was the MC for the evening and local volunteers also helped with the merchandise table which was a huge success.

Captain Watson told the crowd of nearly 200 people that he was proud that Fremantle is the honorary home port of the Sea Shepherd ship Farley Mowat.

"We flew the flag of Fremantle last year from the Farley Mowat and we will take the flag back to Antarctica again this summer where it will proudly fly from the masthead of the Robert Hunter," he said.

On Saturday Captain Watson boarded a whale watching boat operated by Mills Charter and accompanied by the sailing boat Wind Dancer, a party of supporters headed seaward to view the humpback whales, the very same whales targeted by Japanese whalers. Captain Watson spoke about the threats to the whales as humpbacks breached and surfaced all around the boats. (insert photo named: Windjammer.jpg - with caption: Whale watch sailboat the Windjammer displays the Sea Shepherd Jolly Roger Flag)

In the evening the Sea Shepherd group attended a special screening of Whaledreamers hosted by co-producer Steve Tribbeck. (www.whaledreamers.com)

Sunday was an opportunity for Captain Watson and the Sea Shepherd staff to join the Perth members to speak with the general public at the Fremantle Public market where the local supporters hold regular stalls on the weekends.

On Monday, Captain Watson along with Jonny Vasic and Kristine Vasic departed for Melbourne after appearing on the Wake UP! Western Australia morning show on Channel 31.

The visit raised funds towards financing the Sea Shepherd voyage to the Southern Ocean in less than a months time.

"When I see volunteers like Louis, Steve, Ian, Jeff, Marina and others sitting in the sun recruiting support for the whales, I feel that there is hope for humankind," said Captain Watson. "This is the pinnacle of selflessness, to volunteer their time and energies to protecting another species from the greed of our own kind."

Captain Paul Watson, Kristine Vasic, and Jonny Vasic would like to express their appreciation for the hospitality and the great effort to organize the week of appearances and events. Thank-you to Marina Adams for coordinating the media appearances, to Elise Streynberg, Gavin Storey, and Fleur Shack for organizing the event at the Fremantle Town Hall. To Louis and Alice Bell for providing their home as accommodation, to Stephen Quayle for driving us everywhere, to Ian Martin,  Jeff Hansen, and Linda Kemp for all their work in making it a successful visit.

* View the Western Australia Visit page for many more photos * 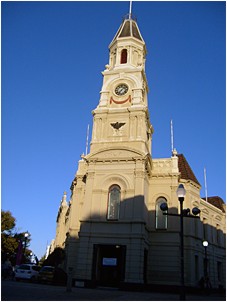