Sea Shepherd Partnership with LUSH Gains Momentum for the Seals

Mark Wolverton, North American CEO of LUSH Cosmetics, stated the role of LUSH with this campaign: 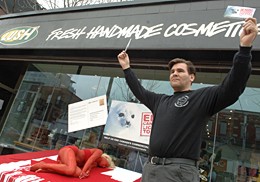 "As a Canadian business that cares about animals and the environment, we are ashamed that the blood continues to flow on the ice of Eastern Canada. Clubbing and shooting baby seals for their fur is cruel to animals, plain and simple, and LUSH Cosmetics wants to see it stopped."

On March 18, 2009, in Toronto, Ontario, LUSH employee Kristi K stripped down to virtually nothing with red paint on herself and lied on a bloody Canadian flag in front of the Queen Street LUSH store for an hour to symbolize the thousands of seals that will be killed and skinned during this year's hunt. Sea Shepherd Development Director, Alex S. Earl, and several local Sea Shepherd supporters were on hand to provide support, to speak with the media, and to encourage the numerous individuals passing by to sign a postcard voicing their opposition to the slaughter. LUSH store employees dressed as pirates in support of the event and Sea Shepherd.

On March 19, 2009, Captain Paul Watson spoke at the LUSH Georgetown store in Washington, D.C., where the store staff also dressed like pirates. That evening Captain Watson attended the Environmental Film Festival in Washington, D.C. to introduce the screening of At The Edge of the World about Sea 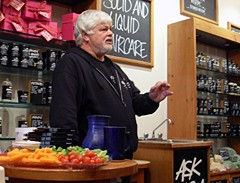 Shepherd's 2006/07 Whale Defense Campaign Operation Leviathan, and LUSH store employees distributed postcards for signature to those attending the screening. Over 300 people attended. As stated by Captain Watson, "Sea Shepherd is extremely grateful to LUSH for their efforts to bring this issue into the spotlight. After witnessing the cruel slaughter of seals first hand and devoting most of my life to bringing it to an end, I am hopeful that the increased public awareness through the LUSH campaign for the seals will aid the efforts by those of us working to stop this barbaric practice once and for all."

On March 24, 2009, the LUSH store in Vancouver on Robson Street hosted another event to continue spreading awareness about the need to end the commercial hunt on the east coast of Canada. LUSH North American co-owner Karen Wolverton personally attended the event and showed her support for the seals by courageously having her body painted red and lying in the middle of a Canadian flag replica. Several media outlets documented the event and many pedestrians stopped to sign petition postcards as well. Sea Shepherd's Media Manager, Amy Baird, was able to attend to support LUSH and speak to the media about the need to end the commercial hunt.

There will be another event on March 26, 2009 in Victoria, BC at the LUSH store on Government Street. Please stop by to show your support! 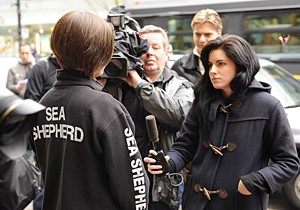 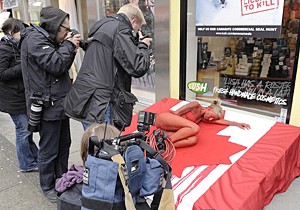 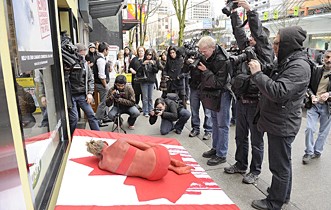