Enforcement naturally falls on the shoulders of governments often under-resourced and over- allocated. This is where Sea Shepherd can and does help — both financially and logistically — the recent efforts fully funded by Sea Shepherd.

“We really appreciate the generous support from Sea Shepherd in patrolling the PIPA waters. The presence of your vessel in the area and making checks on several fishing vessels undoubtedly deterred illegal fishing in PIPA waters,” said Tukabu Teroroko, Director of PIPA.

With SPC Ieakana Tiban, a ten-year seasoned veteran of the Kiribati Police Maritime Unit onboard the Bardot, the team performed the first-ever patrol in the area over the last few weeks. Thanks to vessel monitoring system (VMS) coordinates supplied by the Kiribati police and over 500 vessels from around the world legally permitted to fish within the area, the team had their work cut out for them. Covering nearly 2,000 miles, they stopped, boarded and inspected purse seine and long-lining vessels with potential of carrying a combined gross tonnage of over 7,200. In doing so, Sea Shepherd has proven they have the resources and experience unlike those of other conservation organizations that they are willing to put at the disposal of South Pacific nations.

John Mote, Commander, Kiribati Maritime Police agreed: “We commend Sea Shepherd for supporting the enforcement efforts of PIPA. The Sea Shepherd crew has been extremely professional and collaborative, and we look forward to expanding this program in the future.”

There are several areas around the world in need of assistance, but the South Pacific has become an important focus for Sea Shepherd due to remaining shark populations, progressive leadership, cultural significance, and reliance upon the oceans for economic livelihood. Sea Shepherd stands ready to work with other governments and local agencies to protect their waters, like they have in Kiribati and the Galapagos. Similar offers have been made to other countries in the South Pacific, and the area as well as the issue will remain a long-term focus for Sea Shepherd.

Andersen added, “Not only have we done some critical enforcement on our patrols, we’ve illustrated that we seek collaboration not confrontation with the island nations of the South Pacific. The last thing we want is to sabotage legitimate governmental and conservation efforts; illegal, unregulated and wasteful fishing is our focus, of which the local communities are the casualty. Our intentions are genuine and supportive of the South Pacific’s leadership, culture and economy along with their marine ecosystems and, of course, one of their most critical residents — sharks.” 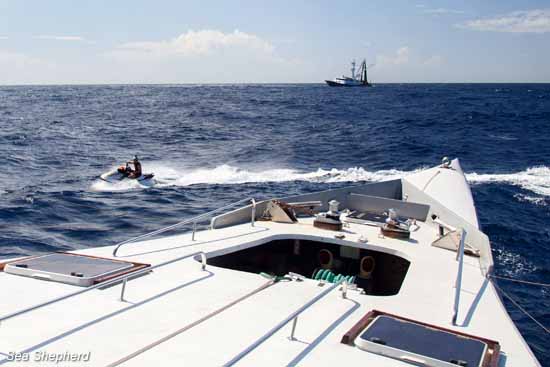