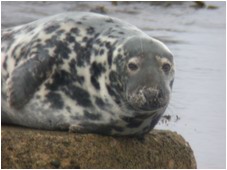 Sea Shepherd Conservation Society is offering a £5,000 reward for information leading to the arrest and conviction of the person or persons responsible for the killing of five grey seals in the Orkney Islands. Four pregnant females and a juvenile were shot in the head and their bodies left on the beach to rot.

Under the Conservation of Seals Act 1970, seals can be shot with a high-velocity rifle by a fisherman possessing an endorsement on their firearms certificate but only if the seal is about to cause damage to fishing gear.

These five seals were not presenting a threat to fishing gear. They were shot on the beach while hauled-out on the shore.

Ross Flett, director of Orkney Seal Rescue, who examined the dead seals after a member of public alerted police on Saturday, said: "I am quite sure the police have a good idea who is behind it, though to prosecute is extremely difficult."

Sea Shepherd is hoping to add some incentive to going ahead with a prosecution.

"If the police are motivated enough, perhaps they will press forward with an investigation." said Captain Paul Watson, Founder and President of Sea Shepherd. "If so we are prepared to contribute the 5,000 British pounds to a police charity of their choice if they can secure a conviction."

"We will also pay out the reward to any member of the public who comes forward with evidence that will contribute to a conviction in this case," added Captain Watson.

The bodies were found on a rocky beach at the Point of Vastray, a headland on the northeast coastline of the Orkney mainland, at a time of year when females come inshore to give birth to their pups.

Sea Shepherd first became active in protecting seals in the Orkney Islands back in the early eighties. The Society purchased the island of Little Green Holm to convert to a seal sanctuary in 1983.