We did not go there nor was it our intention to go there. We needed to confuse the illegal fishing operations and to convince them we were not in the Galapagos Marine Reserve.

Additionally, the Ecuadorian Navy wanted us to leave the Park despite our cooperative working relationship with the National Park. A few days earlier, the Navy had dispatched the gunboat August the 5th to escort us from the Marine Reserve but the vessel had broken down and was forced to return to San Cristobal.

On the 13th, we had intercepted the small Ecuadorian seiner Ancon about one mile off Darwin Island, the furthest north of the Galapagos Islands.

The fishing boat claimed to be out of fuel and water, and also claimed that they had been blown into the marine reserve by a storm although no storms have occurred in this area recently.

Captain Paul Watson ordered them to remain by Darwin and await a patrol vessel from the Galapagos National Park. They did so, but attempted to leave numerous times. The Sea Shepherd vessel Farley Mowat quickly overtook them each time and convinced them to stop.

The Park rangers were happy to see the crew of the Farley Mowat, but Corporal Jose Munuz of the Navy was on their ship and he boarded the Farley Mowat to tell us that the Port Captain in Santa Cruz had ordered us to leave the Marine Reserve.

Captain Watson replied that he was working to help the Park with the cooperation of the National Park.

Corporal Munuz said that if the Farley Mowat did not leave, the Navy would send a ship to escort us out of the Marine Reserve.

Captain Watson replied, "I don't understand why the Navy would send a ship to escort us out for intervening against illegal fishing yet does not send vessels out to stop illegal fishing."

Corporal Munuz said that he was relaying his orders.

Captain Watson told him that the Navy should send a ship up to Darwin and perhaps while they are escorting the Farley Mowat out of the Marine Reserve, they might consider doing some patrolling for illegal activities.

The next morning, the Farley Mowat had moved to the west of Isabela Island where they discovered a large tuna seiner setting its nets just inside the Marine Reserve.

The Farley Mowat dispatched a zodiac inflatable with a film crew to speed on ahead and intercept the tuna seiner. It was discovered to be the Yolanda L registered in Guayaquil, but with an American Captain and an Ecuadorian and American crew. 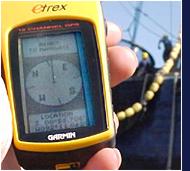 The Farley Mowat crew documented the GPS position of the ship in relationship to its position in the Park and watched as it scooped tons of tuna fish out of the huge purse seine net.

Then while being filmed, the captain said, "I can't help it if the wind forced us to drift into the Reserve."

The captain volunteered that he was in touch with his company, that he sold his catch to Star-Kist and that his company was contacting the United States Coast Guard.

This was a very strange comment for a ship that claims to be Ecuadorian.

Captain Watson informed the captain of the Yolanda L that the National Park ordered them to remain in the present position until a Park vessel could arrive to inspect them.

The American captain said that he takes his orders from the Port Captain at Isabela and he was told he could leave.

The National Park confirmed that the Port Captain was not in contact with the Yolanda L at all.

The documentary crew from the Farley Mowat recorded approx 8 to 10 tons of yellowfin tuna taken from the net and stowed in the hold. All the fish came from the waters of the marine reserve.

The Farley Mowat followed the Yolanda L for about ten miles when it set the net again. The documentary crew was able to document the entire set. This time the set was outside the Marine Reserve.

Jordan de Vaan dove on the outside of the net to document the fish inside. He saw a large swordfish circling the inside of the net looking for an escape. Jordan assisted the swordfish in making the escape and it swam off to freedom.

The Sea Shepherd Conservation Society intends to issue a complaint to Star-Kist over the fact that a vessel that claims to sell tuna to Star-Kist was caught fishing illegally in the Galapagos National Park Marine Reserve.

The Sea Shepherd Conservation Society will be turning over the documentary evidence of the illegal activities of the Yolanda L to the Galapagos National Park.

The crew of the Farley Mowat observed two other large seiners fishing just outside the border of the marine reserve.

The ship will continue its patrol in the unprotected, precious island waters of the Galapagos.