“Having Fremantle as a homeport for Gojira, and flying the Australian flag, optimizes Australia as the most passionate defender of whales in the world,” said Sea Shepherd’s Australian Director Jeff Hansen. 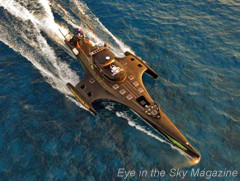 click to enlargeGojira is currently en route to Hobart, Tasmania to join the rest of Sea Shepherd’s fleet with a mission to defend the Southern Ocean Whale Sanctuary. On December 2, Captain Paul Watson and his international crew will embark upon their annual journey aboard three ships Steve Irwin, Bob Barker, and Gojira, on a mission to enforce international conservation law and prevent the illegal slaughter of endangered whales.

Sea Shepherd would also like to extend a big thank you to Fremantle's mayor Brad Pettitt who showed his support in representing Australia’s wishes in having the compassion and conviction to stand up to the illegal whalers.